Why I'm an Optimist 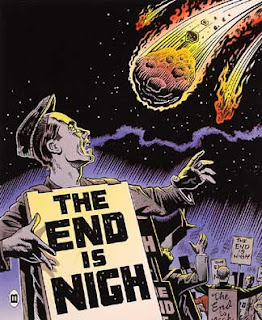 The latest Eurobarometer survey of EU citizens makes for gloomy fare. When asked if they thought the life of those who are children today will be easier, more difficult or the same as for today's adults the overwhelming majority expect it will be more difficult: 61% on average across the EU27 nations. In Ireland, 54% expect life will be more difficult for our children, and only 15% expect it will be easier (see question QD5). Such is the despondency brought on by our current difficulties. But as I see it the people of Ireland are being absolutely ridiculous if they really believe that.

I think we have an unusual inversion of uncertainty and time horizons right now. Normally the near term is fairly certain, but the further ahead you look into the future the more uncertain things become. However at present we are experiencing the mental equivalent of an inverted yield curve, the normal progression from certainty to uncertainty has been flipped. So it seems that in the short term we face enormous uncertainty: the economy, the banks, the nature and timing of recovery etc. But in the medium to longer term things look much better - more certain - because of our remaining stock of human, physical and financial capital (albeit depleted) and what they mean for future levels of productivity and growth. Even allowing for the 36 global risks facing the world at present.

Why the 'uncertainty inversion'? Obviously it has to do with the shocks to the Irish economy - and most especially to it's employers and employees - resulting from the recession/depression we are still experiencing. It's like we are experiencing a collective post traumatic stress disorder. It's normal enough in the circumstances.

But a disorder is still a disorder: it isn't normal or healthy. And the idea that the future for children in Ireland will be worse than the present is for adults reflects a deeply unhealthy mindset. One still in a state of shock. For the reality is that life in Ireland today in 2010 is - on almost every measure - better than life in the 1990s, the 1980s and the 1970s. Unemployment, poverty, emigration and crime were far worse - not to mention the running sore of political violence a few hours to the north.

I get that the people who have created the mess Ireland is in (or who have made it much worse than it would otherwise have been given the global forces involved) need to be brought to account and not let off the hook. But I don't think speaking positively about the future amounts to a 'get-out-of-jail' card for those responsible for the depth of our recession. And yet I feel there is almost a blanket refusal by many commentators to see anything positive about our current circumstances and about emerging trends. Rather there seems to be a constant requirement to 'emphasise the negative'.

Well here's the thing: most of the businesses that existed before the recession are still in existence, and the same goes for most of the jobs. If the employers and employees of Ireland saw the world through the gloom-tinted glasses of the commentariat we'd not get out of our beds in the morning. Luckily we have better things to be doing than paying attention to the constant mood music of doom and gloom (nor to the self serving obfuscation of our political 'leaders').

All recessions end in recovery - and so will this one. And then we'll get on with building a better future in Ireland for our children just as our parents and grandparents did for us. Moreover, we'll do it with more resources and better odds for success than anything our ancestors ever had.