A Big Future for History 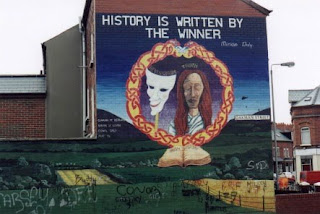 I bid on a few lots at the Adams 'Independence' auction earlier this week. I got the two things I was keenest to get: an original Ulster Solemn League and Covenant parchment, and a copy of the Irish War News. The former was signed on Ulster Day, Saturday 28th September 1912 by William James Ward at the City Hall in Belfast. The lot also included a Ladies Covenant (to my shame, I wasn't aware there was such a thing), signed at Fishwick Church in Belfast by Ruby Kathleen Rhind on the same day. The Irish War News, on the other hand, was published on Tuesday, April 25th 1916 by the Rebels then less than twenty four hours into their occupation of the GPO and other sites around Dublin. On the back it reads: At the moment of writing this report (9.30am, Tuesday) the Republican forces hold all their positions and the British forces have nowhere broken through. The rest, as they say, was history. 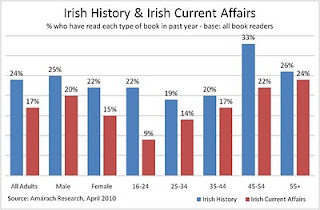 Interest in Irish history peaks among male, 45-54 year olds (my own demographic). I suspect that it's a lifestage thing: as you see your own children become adults you become much more conscious of your own history as you think back to your world when you became an adult. And how much it has changed since. Hence the interest in history books.

I predict that the combination of Ireland's middle-ageing population and the decade of centenaries that will gather momentum after Ulster Day 2012 will provide a massive boost to demand. I see a big future for history.
Posted by Gerard O'Neill at Friday, April 23, 2010