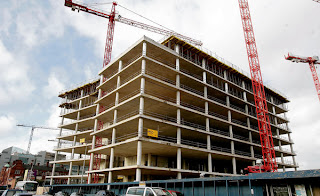 Institutions will try to preserve the problem to which they are the solution. Clay Shirky

That's one of those insights that increasingly seems to be confirmed everywhere I look. NAMA, Anglo Irish Bank... the Irish Government. Even Social Partnership, as the wheels threaten to come off the latest, negotiated settlement between the Government and the representatives of (most of) its employees. Kevin Kelly applies the Shirky Principle to trade unions thus:

Unions were a brilliant solution to the problem of capital management which tended to exploit uncapitalized workers. But over time as capital increased in complexity, unions complexified as well, until unions needed management. The two became one system -- union/management. So now the problem with unions is that they are locked into the old framework, the old system. They inadvertently perpetuate the continuation of the problem (management) they are the solution to because as long as unions exists, companies feel they need management to offset them, and so the two became co-dependent. In effect problems and solutions tend become a single system.

But I think there's a logical corollary of the Shirky Principle, namely that preserving the problem ultimately destroys the institution. Take sovereign debt: the IMF is warning us that:

...the biggest threats have moved from the private to the public sectors in advanced economies. Governments not only took on many of the bad assets from private institutions but due to the recession face continuing heavy borrowing needs for the next few years. Slow growth in the real economy and high unemployment will retard tax revenues and require higher government spending—such as on unemployment benefits and job creation activities.

So governments - including Ireland's - are on the hook for the debts arising from their efforts to solve the problem of an imploding banking system. But David Goldman sees a bigger problem down the track in the United States:

In the new corporatism, where governments bail out banks and banks bail out the government, the question continuously arises: who’s the senior partner in the merger?

The spat over Richie Boucher's pension is but a mere foretaste of what is to come: imagine the media reaction when the Irish banks start reporting large and growing profits? Now I've nothing against banks making profits (by being banks, not property-addicted pawnbrokers), but I suspect that that'll be a hard one for Irish taxpayers (and borrowers and mortgagees) to swallow. So the government's solution to the problem will have created another problem...

Like I said before whilst reflecting on Shirky's insights, we may be on the cusp of the Coasean demise of the state, and not just in Ireland. I don't doubt we'll come up with new and better institutions to solve the different problems we will face, but nor do I doubt that the transition will be a messy and difficult one. Twas ever thus.
Posted by Gerard O'Neill at Wednesday, April 21, 2010