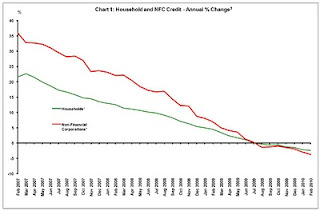 We've all heard of 'jobless growth', but what about 'loanless growth'? That seems to be the scenario we are facing - the Minister for Finance and the banks' best intentions to the contrary. Take Wednesday's Central Bank data on household and business (non-financials) credit growth: as the chart shows, the rate of decline in lending is actually accelerating...

What's going on? According to the Minister's speech on Gloomy Tuesday:

The actions I have announced today will put the banks in a much stronger position than before. I am imposing specific lending targets on AIB and Bank of Ireland. They will make available for targeted lending not less than €3 billion each for new or increased credit facilities to SMEs in both 2010 and 2011. This in particular must include funds for working capital for businesses. This will be a significant increase on the figures reported by the banks for 2009 and will help to sustain the economy and foster growth. This figure will be reviewed as the needs of the economy change.

Bank of Ireland and AIB must also make available €20 million each for Seed Capital to be provided to supported ventures, building on the very successful programme launched in 2009.They will each set up a fund of up to €100 million for Environmental, Clean Energy and Innovation projects. This is in addition to the €100 million provided under the recapitalisation last year.

Yesterday saw the launch of the Credit Review Office, a kind of 'Banking Appeals Tribunal' equivalent to the Employment Appeals Tribunal - for disgruntled SMEs. Its purpose is to 'provide a process to review decisions by the participating banks to refuse, reduce or withdraw credit facilities.' I find all this very disturbing, and not because I don't think the banks have reduced their lending to businesses - plainly they have (or more to the point have had to because of the consequences of their previous behaviour for their liquidity ratios etc).

But such initiatives fly in the face of the economic reality facing Irish businesses - it's now very expensive and very risky to borrow in this country: even if the funds are available. The chart below shows the trend in the real rate of interest in Ireland (3 month euribor minus the harmonised index of consumer prices in Ireland) - thanks to deflation we now have the highest real interest rate for borrowers in the eurozone: 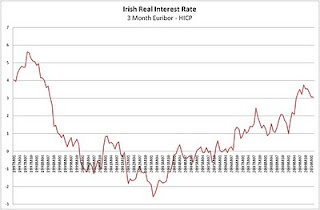 Obviously the rates charged on loans to SMEs are several percentage points above euribor, but it provides the basis on which banks determine variable rate loans etc. Not surprisingly, the trend in the real rate of growth in borrowing by businesses is strongly influenced by the real interest rate as the next chart shows: 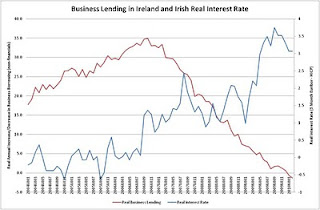 So it's all very well cajoling the banks to lend, but what if businesses don't want to borrow? In a balance sheet recession, profit maximization gives way to debt minimization as the rationale for business behaviour.

My main concern now is the potential for an extraordinary degree of micro-managing of the banks by politicians and civil servants. It isn't just the Credit Review Office that indicates the likely involvement in day-to-day banking activities. This also from the Minister's speech:

I am requiring the banks to:
- commit resources to work with Enterprise Ireland and the IBF to develop sectoral expertise in the modern growth sectors of the Irish economy;
- explore with Enterprise Ireland and the IBF how best to develop the range of banking services that Irish SMEs trading internationally will need; and
- develop expertise and bring forward new credit products in areas where cashflow, rather than property or assets, is the basis for business lending

In other words, he is demanding the banks do the things they should do anyway (and used to do before becoming property pawnbrokers). We'll see how that works.

In the meantime Irish businesses will focus on growing their businesses using available resources, managing their cash flow and by negotiating lower prices for inputs - including labour. We'll probably also see a lot more 'angel finance' and DIY-loan syndication as hyper-cautious businesses steer clear of very expensive bank lending: whatever the Credit Review Office might do for them.