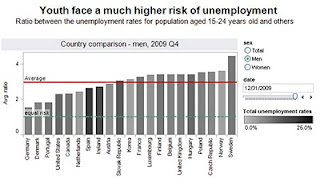 It's no consolation to our unemployed young men, but it could be worse. They could be living in Sweden. According to the OECD (see chart), the unemployment rate for 15-24 year old men in Ireland is just over twice that for all men of working age. In Sweden it's a ratio of four to one. A case of gender feminism overshooting the equality target perhaps?

But what is to be done? Ireland's approach is the tried and trusted one of ignoring the problem and hoping it will go away. Which will leave us looking like the gender equivalent of a mirror image of China as Ronan Lyons sees it.

The OECD itself is challenging member countries to avoid a situation whereby our economies lose an entire generation of young people to the labour market and hence to future economic output (and the consequences will go far beyond the economy). Worse, as the ESRI pointed out recently, if young people - especially young men - leave school too early because of despondency about future job prospects then they chances of them making up for lost ground later will be tiny.

Education is key. Especially training in skills that are best delivered outside of traditional third level structures. But that will take time - and we don't have enough time to arrest the disaster now unfolding for a generation of young European men. Which is why we need to pull on all the relevant economic levers: suspending the minimum wage, getting rid of employers' PRSI and workfare for able bodied young men and women in receipt of social welfare payments.

Unfortunately only politicians can make this happen. But if they do, employers and entrepreneurs will do their bit to stop the damage to our youth before it's too late.
Posted by Gerard O'Neill at Thursday, April 15, 2010