What have immigrants ever done for us? 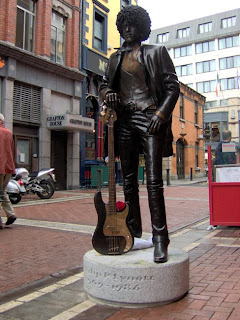 The killing last week of Toyosi Shittabbey in Tyrrelstown has inevitably provoked much soul-searching about the nature of race relations in Ireland and the wider issue of immigration. Yet the reality is that immigration isn't a concern for most people in Ireland: only 2% in a recent survey thought it one of the two most important issues facing Ireland at the moment (compared to 9% across the EU27 as a whole and 29% next door in the UK).

Why is that? The most obvious reason is that Ireland's very recent experience of immigration coincided with an unprecedented economic boom in which immigrants were seen as filling jobs that would not otherwise be filled. Add to that the obvious fact that such immigrants were, overwhelmingly, white Europeans from culturally Christian countries then it followed that the potential for racial or religious conflict with immigrants (and/or its manipulation by indigenous politicians) was minimised. In marked contrast, the UK has had a very different pattern and experience of immigration, hence the greater level of concern there about the issue. Indeed the remarkable thing is how little antipathy there has been to immigrants even as the boom that brought most of them here has turned to bust: there have been no demands for Irish jobs for Irish workers.

However, it would be naive to think that Ireland has been spared any negative social and political consequences from immigration. The ghettoisation of asylum-seekers in specific locations, coupled with restrictions on their right to take up employment, seems designed to create the potential for racial and religious conflict with the indigenous Irish population in the same catchment areas. Add to the mix the fact that asylum-seekers are overwhelmingly non-white and from cultures other than Christian (e.g.: Nigerians and Pakistanis made up 3 in 10 asylum-seekers in 2009 according to the Office of the Refugees Applications Commissioner), and that potential is heightened further, especially when the catchment areas themselves are subject to worse than average economic conditions.

A number of things will mitigate such potential conflicts. Giving asylum-seekers the right to work if jobs are available might help (one of the few sensible ideas proposed by Social Justice Ireland in their recent report, but heh, credit where credit is due). Moreover, the collapse in the number of refugees applying for asylum in recent years (and the even greater collapse in the number of applications subsequently approved) has certainly assuaged any concerns about the country being 'flooded' by immigrants, or of Ireland been seen as a 'soft touch' in such matters.

The view on Ireland's experience of immigration that I have seen in surveys and focus groups with Irish people can be paraphrased as: "we're happy enough with all the immigrants we've had to date, we needed them after all, but we don't want any more for now thank you, especially with the economy in the state it's in". Though it might be tempting to dismiss such views as "really an expression of fear of things as important, or maybe as trivial, as unfamiliar food and hearing languages we do not understand" (to quote Ferdinand von Prondzynski in an interesting post), I think this is to 'trivialise' the very real tensions that can and do exist between immigrants and the indigenous population in almost every country. Let me quote Robert Putnam again:

It would be unfortunate if a politically correct progressivism were to deny the reality of the challenge to social solidarity posed by diversity. It would be equally unfortunate if an ahistorical and ethnocentric conservatism were to deny that addressing that challenge is both feasible and desirable. Max Weber instructed would-be political leaders nearly a century ago that ‘Politics is a slow boring of hard boards.’ The task of becoming comfortable with diversity will not be easy or quick, but it will be speeded by our collective efforts and in the end well worth the effort.

It is worth repeating Conor Cruise O'Brien's observation that 'there are no Irish aborigines': we are all of us descended from immigrants via one lineage or another. I suspect that being an immigrant in Ireland has never been easy, but the best - such as Phil Lynott - overcame multiple disadvantages to the inspiration of many others. As I see it, assimilation is best accomplished by enhancing the native culture and society with the energies and complementary values of each new wave of immigrants - creating a better Ireland in the process (in the eyes of both the indigenous population and the newly assimilated one). The trick, of course, is to have an immigration policy that enables this to happen.

We're not there yet: but if the tragedy in Tyrrelstown enables a more rational debate about such matters then perhaps some good will come from an evil act.
Posted by Gerard O'Neill at Sunday, April 11, 2010