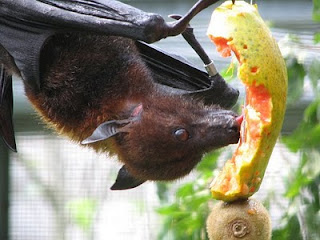 I went to university in the last century, so I appreciate I'm out of touch with the present day realities of our third level institutions. Indeed, when I read that Harvard's Steven Pinker is campaigning for the defence of academic freedom in Ireland I realise that I am way, way out of touch. The case involves Dr Dylan Evans in University College Cork. You can read about Steven Pinker's campaign here - and the back story is here. Warning: contains themes of an adolescent nature.

Something is awry in our universities, and it has nothing to do with the sex lives of fruit bats. Critics from within academia such as Tom Garvin argue that universities are now being run by grey bureaucrats obsessed with targets rather than the pursuit of knowledge. Others argue that the return on investment in a third level education is in danger of turning negative. Add in the growing cost to increasingly cash-strapped governments around the world of providing third level education and its hard to be optimistic about the medium term outlook for universities as they are currently structured.

But the problem goes deeper still. The problem may well lie in the eclipsing of the humanities (and their traditional focus on ethics and moral behaviour) in our universities by the sciences over the course of the twentieth century. As Patrick Deneen puts it in a powerful, conservative critique of the 21st century university:

Contemporary circumstances have only accelerated the demise of the humanities. In the absence of forceful defenses of their existence on today’s campuses, a combination of demands for “usefulness” and “relevance,” along with the reality of shrinking budgets, are likely to make the humanities an ever smaller part of the university. They will persist in some form as a “boutique” showcase, an ornament that indicates respect for high learning, but the trajectory of the humanities continues to be one of decline.

...At colleges across the land, panel discussions organized on the economic crisis have bemoaned such things as the absence of oversight, a lax regulatory regime, failures of public and private entities to exercise diligence in dispensing credit or expanding complex financial products. But what university president or leader has admitted that there was some culpability on the part of his own institution for failing to well-educate its students? After all, it was the leading graduates of the elite institutions of the nation who occupied places of esteem in financial and political institutions throughout the land that helped to precipitate this crisis. Our universities readily take credit for their Rhodes scholars and Fulbright award winners. What of those graduates who helped foster an environment of avarice and get-rich-quick schemes? Are we so assured that they did not learn exceedingly well the lessons that were taught them in college?

I'm not sure if Patrick considers the social sciences - including economics - to be fellow victims of the decline of the humanities: though I would have thought they had fared comparatively better than, say, philosophy departments. But there's only one problem with all of this in the context of the UCC debacle: Dr. Dylan Evans is a Lecturer in Behavioural Science in UCC's School of Medicine.