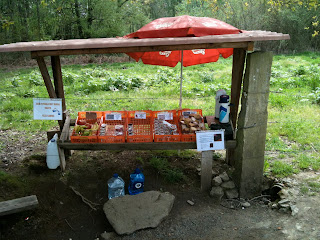 I'm back from the Camino de Santiago, 115km and just a few blisters later. A very different holiday experience to any I've ever had before (though calling it a 'holiday' seems a little odd for some reason: it really did feel more like a pilgrimage for our small party of 'peregrinos'). The Galician region in northern Spain that we walked through is remarkable: and not just for the scenery. I was intrigued by the local economy, during a week that saw the Spanish unemployment rate top 20%.

It's extraordinary these days to see people - often elderly couples - manually scything harvests and sowing seeds without the benefit of modern machinery (though that was obviously in use throughout the region as well). I suspect theirs are much more self-sufficient households than is the norm in rural Ireland today. It as also a reminder of the very different family structures evident across Europe (that I was first introduced to by Emmanuel Todd's brilliant 1983 book on Explanation of Ideology: Family Structure & Social System). A more recent meditation on similar themes is that in Tory MP David Willetts' new book The Pinch: How the Baby Boomers Took Their Children's Future - And Why They Should Give it Back. Steve Sailer's 'review of a review' of the book quotes the following:

The English have a private, market-based idea of property, in contrast to the familial property forms of our continental neighbours. Over a 44-year period in Leighton Buzzard, more than 900 houses changed hands. Two-thirds were sold to someone outside the family, rather than being passed down. The years in question? 1464 to 1508.

By contrast, the large familial networks of continental Europe act as the institutional anchor for property ownership and transmission, as well as for the formation of businesses and the provision of welfare. Willetts speculates that the property-managing function of French families may explain why romantic love there is more often associated with extramarital relationships. The orientation towards family-owned firms in Germany helps to explain the strength of the Mittelstand, the medium-sized, locally rooted layers of corporations...

But our [English] particular social economy has two important consequences. First, the smallness of our families puts a greater emphasis on non-familial civic institutions. Small families need civil society more. This is why medieval guilds, trade unions and churches have played such an important role in our history.

I think here in Ireland we have migrated in recent generations from a continental-style familial network to a more private-property, nuclear family type structure. The in-between phase has been problematic, and a lot of our problems of late have been due to the lack of a deeply embedded - and trusted - set of non-familial civic institutions necessary to support the newer structure. Trust seems less of an issue in Spain: as evident from the 'honesty bar' type stall I photographed, requesting passers by to donate a euro for each item taken from the stall.

The irony, however, is that we may well see a return to something like the more independent but locally networked families and households that I saw in Spain. Rising energy costs coupled with smarter, distributed grids of power generation and know-how might see some kind of return to how things used to be:

This is why, until quite recently, at least half the adult members of most families, aside from the urban poor, worked in the household economy instead of the money economy. It’s also why a grandparent or two or an unmarried aunt so often found a place in the family setting. This had very little to do with charity; an extra pair of hands that could be employed in the household economy was a significant economic asset to most families. One of the advantages of this, of course, is that elderly people continued to have a valued and productive role in their families and communities, instead of being paid to go away and do nothing until they die, as so many of them are today.

Right now, a developed household economy is a sign of economic backwardness. But another bad turn (or three) in the unfolding financial and energy crisis might see the household economy loom larger in our economic future. I just hope my blisters have healed before I have to put on the wellies...
Posted by Gerard O'Neill at Sunday, May 02, 2010