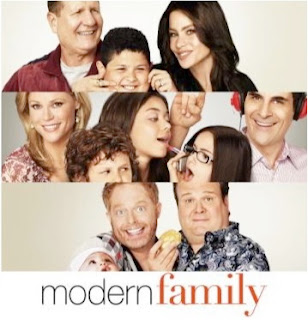 I enjoy watching Modern Family: it's funny, clever, avoids most of the cliches (yes, dad can be dumb, but mum falls of her pedestal from time-to-time too), and it's imbued with a gentle compassion for all the challenges life throws at families these days. I also have no doubts that it will date terribly in the years ahead. The family lives portrayed in the series will inevitably appear as bizarre as the 1960s domestic lives portrayed in the Mad Men series appear to us now.

I believe we are living through a moment of profound change in family life - an evolution if you will - that will have far reaching social, cultural and economic implications. Change is happening and still has some way to go. Many of the forces driving these changes are already familiar:
The list is by no means exhaustive, and so far so familiar. What is interesting, however, is to anticipate the trajectory of not just these trends but others that are emerging right now. For example:
Enter the behavioural sciences. What can the growing number of insights from evolutionary psychology and behavioural economics tell us about the present and future trajectory of the modern family in all its manifestations? This is where it gets interesting. A study of The Economic Value of Virtue finds that:

...the prevalence of female virginity can be affected by economic variables. Using a very parsimonious mating model, where preserving her virtue helps a woman to improve her chances of marrying a husband of higher social status, we have obtained results that are fairly consistent with cross-cultural and historical evidence. In particular, economic development, increased female labor force participation, lower male inequality, stronger social stratification and higher social status may all weaken the incentive for women to preserve their virtue, thus explaining a lower prevalence of virginity. This is a further example of how the incentives to adhere to cultural and moral values can be shaped by economic factors.

Of course much of this will seem quaint: virginity and pre-marital sex have long ceased to warrant the attention they got in earlier times. But the issue of how economic factors influence the choices women make about the men they choose to be fathers to their children (the old adage that 'men chase and women choose' is still as true as ever) is still a pertinent one. And many of the economic forces that drove women's choices (participation in third level education, rising wages, expanding job opportunities especially in the public sector, easy access to debt) will likely go into reverse in the years ahead (if they haven't already) given the medium to long term outlook for most developed countries right now. The same goes for men as well of course.

So much for behavioural economics - what about evolutionary psychology? Again there are some intriguing insights emerging from new research. Take Maslow's hierarchy of human needs: a standard feature in every undergraduate psychology student's education. But what if he got it wrong? As Douglas Kenrick explains:

But the modern integration of ideas from neuroscience, developmental biology, and evolutionary psychology suggests that Maslow had a few things wrong. For one thing, he never gave much thought to reproduction. He conceived of “higher needs” as completely personal strivings, unconnected from other people, and totally divorced from biological needs. Parental motivations were completely missing from his hierarchy, and he placed “sexual needs” down at the bottom – along with hunger and thirst. Presumably, sexual urges were biological annoyances that could be as well dispatched by masturbation as by having intercourse, before one moved back to higher pursuits like playing the guitar or writing poetry.

From a modern evolutionary perspective, that is a curious set of assumptions. For one thing, all living organisms, including you and I, inherited a set of motivational mechanisms that inspired us to reproduce. Like other mammals, humans also have strong attachments to the offspring they produce, and unlike most mammals, both sexes develop attachments to their mates and their offspring. In the renovated pyramid, reproductive goals are at the top, not the bottom.

In a brilliant and fascinating paper, Kenrick and his co-authors propose a different hierarchy, as illustrated below: 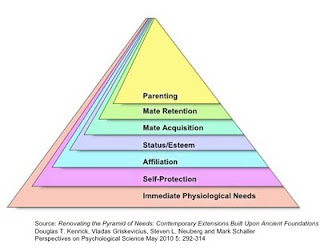 A consideration of ultimate function of behaviors and of life history development counsels the explicit inclusion of motivational levels linked to mating and reproduction. Reproduction for humans is not ultimately about self-gratification, but involves a considerable diversion of resources away from selfish goals and toward other human beings in our social networks. A consideration of life history trade-offs also implies that later developing motive systems never fully replace earlier ones, but continue to coexist, ready to be activated depending on current opportunities and threats in the environment, in interaction with individual differences. Thus, a key point of this revised perspective is the focus on the ongoing dynamic interaction between internal motives and their functional links to ongoing environmental threats and opportunities.

It might all seem obvious - and yet it wasn't to Abraham Maslow himself, even though he was married (to his first cousin) and had two daughters. His humanistic theories of self actualisation became the predominant psychological paradigm for cultural change in the 1960s and 1970s. The reconfiguration of his hierarchy to something closer to the lived human experience - in which mating and parenting are key drivers behaviour throughout most of our lives - may well herald a new evaluation of the evolving family in combination with the other forces for change I have referred to above.

Such an evaluation will - I suspect - lead us to a very different future for the family in the years ahead. Not so much modern family as 'actualised family', with perhaps an economic dash or two of pre-modern family for good measure.
Posted by Gerard O'Neill at Friday, May 21, 2010