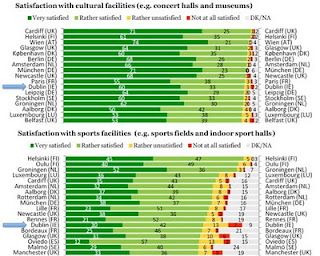 So much for Ireland's Dublin-centric media. A recent report comparing the quality of life in Dublin with 74 other cities didn't get a mention in any of them, as far as I can tell. Maybe it's because it contains mostly good news: our capital city isn't a bad place to live by comparison with the rest of Europe. I'd say we got a B+: not quite up there with Oviedo in Spain (which scored very well on many measures), but definitely not down there with Athens in Greece (and that was before the riots).

The charts I've taken from the report shows Dublin scoring well in terms of citizen satisfaction with cultural and sports facilities. We don't do so well on health services and public transport (but at least we're starting to manage private transport more effectively).

Another pleasant surprise: Dublin and Belfast score similarly on quite a few measures - nice to see the two biggest cities on the island doing so well.