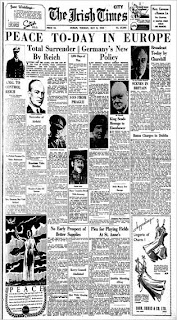 Yesterday was the 65th anniversary of VE Day - Victory in Europe. Or the end of the Emergency, if you were living in Ireland at the time. Today also happens to be Europe Day, the 60th anniversary of the Schuman Declaration - a speech by French Foreign Minister Robert Schuman which declared there should be "a coming together of Europe" and a pooling of resources which would make war "not only unthinkable but materially impossible". It instigated the changes that ultimately lead to the European Union and, indeed, to the eurozone. These two historical events were, of course, intimately linked, and both should be a cause for commemoration and celebration because of the peace, freedom and prosperity that they heralded.

History provides perspective on the current realities in Europe. And so does distance. Take the view from China: what are Europe's options and what is the most likely outcome? In a fascinating commentary on the crisis in Greece (and the eurozone), Francesco Sisci - who is based in Beijing - provides a sobering assessment of the options facing Europe. His bottom line: Europe must let Germany take control. In other words, the historic task of German containment - beginning from German unification under Bismark in the late 19th century and continuing through two world wars to German re-unification in the late 20th century - must now be reversed.

Assessing the different options for dealing with Greece, Sisci sees only one that is viable:

Germany could decide that Greece is its problem, and thus push for a European political union that eventually would de facto politically take over Greece and the rest of Europe. Berlin, aided by other disciplined European countries, could administratively "invade" sinful countries and bring about a European economic discipline that would eventually save the continent.

Obviously, as yesterday's and today's anniversaries remind us, the idea of an ascendant Germany pushing its (albeit, economic) weight around will raise many hackles - and meet considerable resistance. So what could Germany do to allay such inevitable concerns? Sisci again:

This push could certainly start a panic, so how should that be avoided? Germany should adopt English and strengthen its financial and economic links with Britain. This is already happening, as Germany is by far more Anglicized than other European countries, and Frankfurt ceded to London the primacy of the stock exchange. It should also become more "Latin". Over a millennium ago, the invading German tribes absorbed Roman culture, dominated Europe, and brought about the new rise of civilization in the continent.

German Emperor Frederic II made Palermo his capital, stressing the Mediterranean inclination of his empire, and Frederic Barbarossa found a modus vivendi with the rising dynamic Italian cities, which were to become the cradle of capitalism and of the modern world. Present Europe should look at those examples to find a way forward to avoid disaster.

Admittedly all of this is somewhat removed from the day-to-day concerns of the Irish people. As was the Second World War come to think of it. But the euro ties us closer to Germany and its economic and political ambitions than anything else; short of electing Irish members to the Bundestag.

History hasn't ended: it has just changed direction.
Posted by Gerard O'Neill at Sunday, May 09, 2010