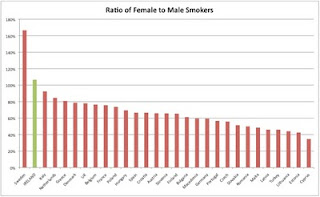 Smoking is a feminist issue. Or at least it should be in Ireland. Ireland is one of only two countries in the European Union with more female than male smokers. The other is Sweden: as the chart shows. I've derived the ratios from the latest Eurobarometer survey on smoking. This is strange: in every other country men outnumber women in the smoking league tables - doing their bit to exacerbate the gender death gap. But not in Ireland.

We are bucking the trend in several other regards. The incidence of smoking in Ireland is rising: from 29% of adults in 2006 to 31% last year. In 2006 we were below the EU average (32%), by 2009 we were above the EU average (29%). The main driver is the incidence of smoking among women in Ireland versus the EU female average (32% vs 25% respectively) - Irish men are less likely than their EU counterparts to smoke (30% vs 35%). The Office of Tobacco Control has also recorded periods when more women than men smoked in Ireland in the past.

What's going on? Perhaps it's a classic case of what behavioural economists call hyperbolic discounting: future pain seems so far away it just doesn't seem to matter relative to contemporary pleasures. Or perhaps Irish women are 'overly optimistic' about the future, hence their low levels of depression in comparison to women in other EU nations.

But it does pose a challenge for policy makers. We've tried smoking bans, ad campaigns and straightforward prohibition in relation to cigarette vending machines etc. Without a lot of success it seems. Given the pressures on government communications budgets, perhaps now is the time to unleash the insights of behavioural economics as discussed at last week's seminar organised by the UCD Geary Institute? It might be more 'economical'.
Posted by Gerard O'Neill at Sunday, May 30, 2010