Yesterday's news from the Financial Regulator tells us that 1 in 25 mortgages are in arrears. Or, if you prefer, 24 in 25 are not. Admittedly the former makes for a more 'exciting' headline.

What the Regulator doesn't tell us is who is in arrears. I've had an indirect stab at it, by asking a quota sample of 1,000 adults* earlier this month the question:

Q. Do you currently have any borrowings including personal loans, mortgage, credit cards, car loans?

It was a simple yes/no response, and here are the results: 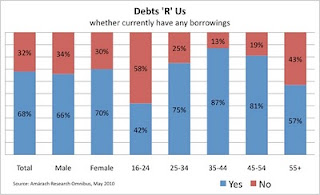 At the moment in Ireland roughly two thirds of adults have some form of debt - one third don't. Not surprisingly (from an economics of the lifecycle perspective) the middle aged are more likely to have debts than younger or older adults. No surprise there. The key question, of course, is whether the debt levels of those with borrowings are manageable or not - clearly not in the case of mortgage accounts in arrears. So we asked the question of those with borrowings:

Q. Thinking about all borrowings you have, such as loans, credit cards and your mortgage if applicable, would you say that?

The answers are shown in the chart below: 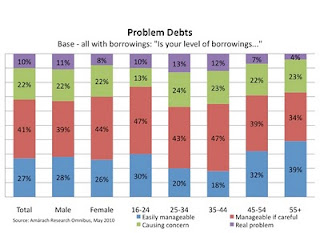 The chart tells us that right now just over one in four adults with borrowings has no difficulty managing their debts (including mortgages). Another two in five are doing okay so long as they are careful. However, over one in five are concerned about their debt problems (but just about managing), and one in ten believe their levels of borrowings are now a real problem. The debt burden is most difficult for those aged 25-34 and 35-44. The latter, as we saw in the first chart, are also the group most likely to have borrowings.

All of which goes to explain why we haven't 'gone Greek' here in Ireland. The middle aged don't do street protests. At least not yet anyway. But they do vote - more than the younger age groups relatively unaffected by debt problems.

Woe betide the government that takes away the future from the middle aged and the middle class...