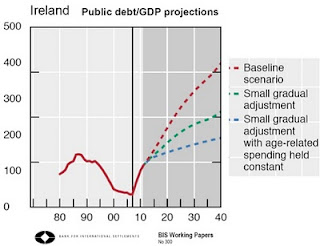 John Kay recently provided a neat summary of the situation facing Gordon Brown and other advocates of the expanding state:

Like many on today’s political left, he is a socialist mugged by reality. Their practical socialism began from the assumption that economic activity should normally be subordinated to political control. But given the manifest fact that this system did not work very well, either in the collectivised economies of eastern Europe or the planned economies of social democracies, political control is to be watered down and applied by stealth. This is not an inspiring doctrine, and it has not inspired.

The same applies to Ireland. A permanent expansion in public sector spending on the back of temporary surges in tax revenues during the economic boom has been 'mugged' by the combined reality of a domestic banking crisis and an international credit crisis. Our recent 'spend it when you've got it' approach to fiscal policy isn't a whole lot different from Greece. Here's Dalrymple's explanation:

When the crowd tried to storm the Greek parliament, shouting, “Thieves! Thieves!,” its anger was misdirected. It was a classic case of what Freudians call projection: the attribution to others of one’s own faults. It is true that the Greek politicians are much to blame for the current situation, and no doubt many of them are thieves; but their real crime was not stealing, but offering a substantial proportion of the Greek population a standard of living that was economically unjustified, maintained for a time by borrowing, and in the long run unsustainable, in return for votes. The crime of that substantial proportion of the Greek population was to accept the bribe that the politicians offered; they were only too prepared to live well at someone else’s expense. The thieves were not principally the politicians, but the demonstrators.

Whilst we can blame greedy bankers for lending the money to profligate governments (bankers behaving irresponsibly because they thought they were on to a sure thing, imagine that), we are faced with the 'Haughey-esque' realisation that 'We have met the enemy and he is us'.

The Bank for International Settlements has recently warned about the need for drastic action if countries like Ireland are to avoid the threat of sovereign default. The chart, from a recent BIS report, shows that even after taking drastic actions, Ireland's government debt levels are set to break through levels last seen in the 1980s level. Every other EU country is projected to follow a similar path.

I fear we are at a very dangerous turning point in Europe. Not only is the euro being stress-tested to destruction, democracy is being stress-tested alongside it. When people get mugged they often turn vigilante - and cooler, more considered behaviour becomes more difficult to adopt. And that's the real danger - our politicians might decide that drastic actions entail more than just fiscal responsibility:

So here’s the question: how long before the Economist, the Murdoch press and similar give up on democracy on the grounds of its incapacity to “deliver” firm government. We’ve been here before, of course, in the 1970s, when the Economist and the Times backed the Pinochet coup in Chile. Of the PIIGS, only Ireland has escaped dictatorship in living memory and some of the southern European countries still contain contain authoritarian rumps (with special strength in the armed forces and law enforcement).

I'm less worried about the media than I am about politicians. Most are, as ever, only lukewarm supporters of democracy and democratic institutions. So all democrats must remain vigilant - against the vigilantes.
Posted by Gerard O'Neill at Saturday, May 08, 2010