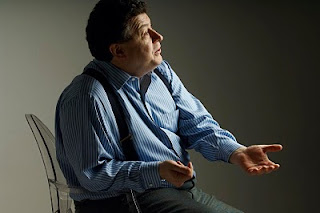 I was at the IAPI talk by Rory Sutherland earlier in the week. He describes himself as an 'Advertarian': or, as he put it, he would get rid of all the police and put out lots of posters and advertisements saying 'Behave'! Clearly a man who values the 'libertarian' in 'libertarian paternalism'.

Rory argues that marketing and advertising should align itself with behavioural economics in order to gain more credibility with the financial folk who run businesses these days. All that economics, science and quantitative analysis is just the sort of thing to impress the bean counters. And it might even make for more effective advertising. He makes a great case (see his TED talk here), though I think his idea falls into the category of 'necessary but not sufficient' if the task is to credibly reposition marketing and advertising within corporate hierarchies. I'd combine Rory's ideas with the insights from Larry Light - such as that the core strategic task of marketing is to build and maintain trust between companies and their customers - in order to map the way forward for the marketing profession.

But it wasn't the future of marketing that Rory got me thinking about. Rather it was the potential to use the insights from behavioural economics to facilitate a faster and more sustainable economic recovery. One of the interesting points in Rory's talk was that people are highly influenced by the predominant or majority pattern of behaviour in their society. People save a lot if saving is something most people publicly state to be a good thing (the Chinese experience), and people stay in 'opt out' organ-donor schemes if most people don't opt out. Right now, the majority of people in Ireland believe we are through the worst in terms of the recession, but are still holding tight to their purses and wallets.

It has been proposed that recovery policy should be focused on what George Katona called the "better-better" group: people who feel they are better off than they were a year ago, and who believe they will be even better off in a year's time - and who therefore have a high propensity to spend. As economic psychologist Stephen Lea puts it:

Where are we going to find them in the present climate? The answer is that the great majority of people are not directly affected by the crisis. A recession makes us all less well off on average, but its impact is very unevenly distributed. Some people suffer major effects, losing their jobs or their businesses. But the majority of us suffer only marginal effects - a small increase in taxation, perhaps - and some are virtually immune, including many pensioners.

However, a much larger number of us are affected indirectly, either by the fear that we will be among those hit by the recession or through its effects on friends and family. We are all influenced by the "recession atmosphere" created by the media and policy-makers, with the result that people who are objectively unaffected nonetheless make cautious, conservative economic decisions. People whose circumstances place them in the better-better group nevertheless do not feel part of it.

What we need to do is build realistic confidence among those who can afford to act confidently. There is no economy without psychology, so there can be no economic recovery without psychological recovery. Economic policy needs to encourage people to recognise that they are in the better-better group.

It's an interesting idea: remind people that they are doing okay and it's all right to start spending again. Remember, nine out of ten people who had a job at the start of the recession two years ago still have a job. But there's more: George Katona found that one significant feature of people who were 'better-betters' was that they believed they were very much in control of their own lives; that their future depended on 'what I do myself' (from Katona's pioneering research back in 1974 - truly there's nothing new under the sun.)

So there's a task for behavioural economics: to enable people to feel better off and more in control of their destiny, and thereby nudge the economy into recovery. Who knows, it might even require some advertising...

BTW: I'm participating in a Geary Institute event on behavioural economics for businesses later this month.
Posted by Gerard O'Neill at Friday, May 14, 2010