The Politics of Debt 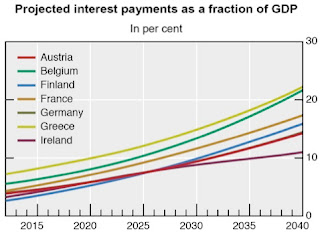 Public debt crises are always and everywhere a political phenomenon. They are consequences of political weakness, excessive expenditure and insufficient taxation, and failures to make decisions about unsustainable fiscal policies are political. They are not the result of profound economic processes. Niall Ferguson

The quote is from a recent presentation by Niall Ferguson to the Peterson Institute. Delivered in his usual smooth, intelligent, urbane and downright terrifying style. If you can't watch it all join him at 26 minutes and watch it to the end. The quote comes about the 37th minute as he's explaining the real causes of debt crises. The big takeaway: when your government's spending more on interest repayments than regular expenditures like health and education then default isn't too far away. He forecasts that the United States will reach the stage in the next six years when US government spending on debt interest and repayments will exceed its military expenditure. The definitive milestone marking the decline phase in America's history in Ferguson's take on things. Though it's nice to see from the recent BIS analyses (referred to recently) that Ireland will be far from the worst in terms of projected debt repayments to GDP ratios. It's my straw and I'm going to cling to it...

And for something a little less smooth but even more terrifying (and for brilliant use of Agitprop type graphics, images and music) see Meltup from the National Inflation Association. The big takeaway: America will response to the crisis Ferguson foresees by speeding up the dollar printing presses. Politicians again. The statistics 43 minutes into the video about current food price inflation in the USA are quite astounding - I had no idea.

Now, which one of my euro bank notes are the ones with the German serial numbers, hmmm...
Posted by Gerard O'Neill at Tuesday, May 18, 2010