Sleeping Through The Recession

I sleep like a baby... every two hours I wake up screaming.
Colin Powell

Recessions make you drowsy. According to barking up the wrong tree, we'll know the recession is over when more people complain about not getting enough sleep. At first glance this might seem counter-intuitive: surely the stresses and worries of recession induce less sleep rather than more? For some yes - but not for others.

To test the 'sleeping through the recession' hypothesis I asked a few questions on the Amárach Research omnibus survey of 1,000 adults last month. With regard to sleep itself, the average Irish adult in our April survey slept 7.4 hours the night before they were interviewed. Obviously the average was a little higher at the weekend and lower during the week. As you can see from the chart below, there is no significant gender difference, but a much bigger difference by age - teenagers sleep a lot, whilst their parents don't (quelle surprise!): 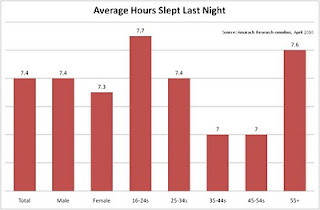 But is this enough sleep? Is there an army of sleep-deprived zombie-workers out there staggering their way through the recession? Maybe not an army, but about a third of adults say they don't get enough sleep (though the majority say they do get enough or even too much) - and it's our forty-somethings who seem the most deprived: 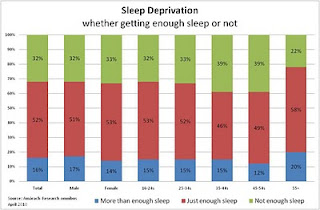 Amazingly enough, 16% of those who sleep 9 or more hours a night say they still don't get enough sleep - again mostly teenagers and young adults. Cry me a river... Though it is interesting to note the association between sleeping patterns and educational attainment: people who completed their formal education at masters degree level are twice as likely to sleep 9 or more hours compared to the total population (17% vs. 9% - n.b.: small base). Now there's an incentive for pursuing post-graduate education you don't hear about too often!

Does it matter? In terms of mental health the answer is definitely yes. In our survey we asked people whether they had experienced different emotions 'a lot yesterday'. When we plot the incidence of different emotions against average hours of sleep the contrast is quite stark - people who sleep more are generally happier and much less likely to be worried or stressed: 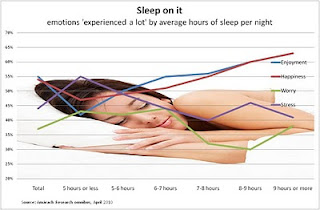 Worse still, a lack of sleep can make you ill and even kill you. But all this begs the question of causality. If you've nothing to worry about (job security, debts etc) then you're bound to sleep better surely? Maybe. However, when you analyse the answers to the AIB-Amárach Recovery Indicator (ARI) questions (latest results here), it isn't quite so clear cut. The next chart shows the answers given to the key ARI question on people's perceptions of the current status of the economy (getting worse, stabilising, getter better) by hours of sleep: 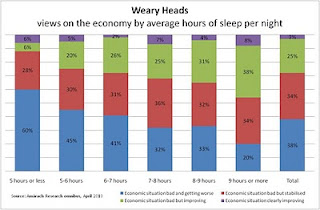 The people who are getting the least sleep are three times as likely to say the economic situation in Ireland is bad and getting worse as those getting the most sleep. But... even among those getting 5-6 hours sleep (below the average) the majority think the economic situation is stabilised or improving. The direction of causality isn't entirely from economic conditions to sleeping conditions.

But what if it's the other way round? What if getting people to sleep more actually improves not only their health but also their outlook on the economy? Such thoughts might lead to a very interesting experiment in behavioural economic policy making, i.e.: accelerating the recovery by increasing the number of bank holidays. Come to think of it, that's the sort of thing that gets politicians re-elected...

I started with a quote so let me finish with one - my favourite from Shakespeare - and the one that certainly provides me with a little bit of perspective during my (waking) moments of stress:

We are such stuff as dreams are made on, and our little life is rounded with a sleep.