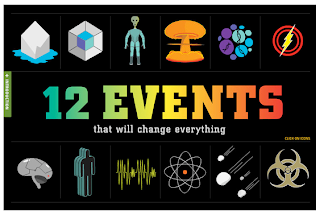 This puts things in perspective:

The fundamental drivers of growth are stronger than they have been at any point in human history. These include the increasing number of highly educated and capable people in the world, the breathtaking speed of technological breakthroughs, globalization, the inclusion of ‘the next billion’ into the world economy, and relative political stability. Hans-Paul Buerkner

Buerkner is talking about Strategic Optimism. It's also applies to Ireland: lousy as our present economic circumstances are, we've never been better placed in terms of people, skills, experience and resources to solve the problems we face. The recession will end in recovery, and we will face new opportunities - and challenges.

Like the 12 events that will change everything between now and 2050: according to Scientific American, that is. Here's Next Big Future's take on the big 12, including a link to Robin Hanson's post about one of the events: AI (which he thinks is the only big event that matters to our future - of a man made nature anyway). See also NBF's Seven Technology Horizon's post in a similar vein.

And if you don't have a subscription to Scientific American (me neither), then check out the very clever interactive guide to the 12 events over at the Richard Dawkin's Foundation.