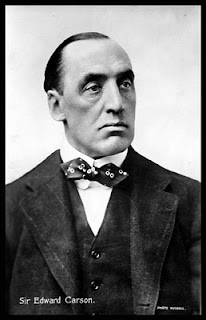 I had a fascinating conversation the other day with a man of impeccable Unionist pedigree: Southern Unionist. His father and uncles had been actively involved in the struggle against Home Rule, active in the arms importation and training sense. What surprised me was his description of their deep and bitter anger at the decision by Edward Carson (a Dublin man, to his shame!) and others to so readily agree to the partition of Ireland. Leaving thousands of Southern Unionists to their fate.

But why were they angry? Hadn't the thousands who signed Ulster's Solemn League and Covenant less than ten years before partition at least saved (most of) Ulster for the Empire? That's what annoyed them: since when had Unionists become Separatists? The same Covenant began by stating that:

Being convinced in our consciences that Home Rule would be disastrous to the material well-being of Ulster as well as of the whole of Ireland... (my emphasis)

The essence of Unionism back then surely meant the union of the British Isles - as certain as the Irish Republic declared in 1916 meant the whole of Ireland. Partition, of course, left neither Unionists nor Republicans with what they had originally wanted.

But my conversation got me thinking. The decimation of the Ulster Unionist party in the recent UK general election points to a sea-change in the political configuration of unionism in Northern Ireland. Many within the broader unionist community are engaged in re-imagining a future direction for unionism in light of these changes. It's time for unionism to look outward, as it has been put recently.

So here's my proposal. Why don't unionists take the opportunity to begin negotiating a new political configuration for these islands, starting now? They have the double advantage of retaining a veto on any referendum on a United Ireland, and a conservative government - their natural ally - in power in Westminster (albeit in coalition). They could negotiate from a position of relative strength (i.e.: relative, say, to ten years time when they might comprise a minority of voters in Northern Ireland).

What would they negotiate? In no particular order, here are some suggestions:
These are just my thoughts for starters - I'm sure I've left off a few key aspirations on the part of Unionists - but it's an indication of the type of negotiated package I believe they could demand if they were of a mind to do so.

And who knows: it might even be feasible to have it all sorted by Friday, 28th September 2012 - the centenary of the Ulster Solemn League and Covenant. Queen Elizabeth might even pop over to give the new arrangement her blessings. Even Sir Edward would approve I'm sure.
Posted by Gerard O'Neill at Wednesday, May 19, 2010