Wish We Were Iceland 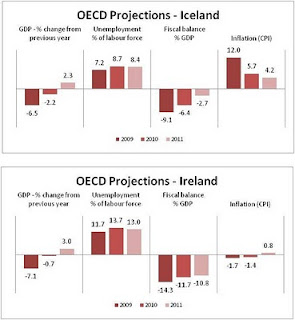 It isn't just a letter that differentiates us from Iceland, it's a digit. The latest OECD economic forecasts for Ireland show double digit rates for unemployment and fiscal deficits - whereas Iceland's projected to have single digit rates.

Even by 2025 Iceland is forecast to be in better shape than Ireland in terms of its net financial liabilities. Makes you wonder where we went wrong...

Still, at least we don't have any volcanoes.
Posted by Gerard O'Neill at Wednesday, May 26, 2010