The Battle of the Narrative 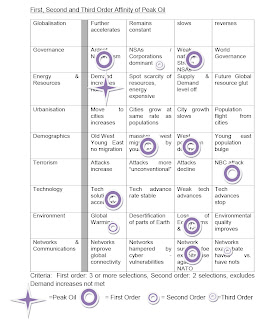 Want of foresight, unwillingness to act when action would be simple and effective, lack of clear thinking, confusion of counsel until the emergency comes, until self-preservation strikes its jarring gong - these are the features which constitute the endless repetition of history. Winston Churchill

Most of the really interesting thinking about the future is found in military analyses. I think it's because the military are charged with having a clear-eyed view of potential threats over time horizons beyond the electoral cycle. Military futurists are also very fond of quotes from Winston Churchill - such as the one above. This despite Churchill's own disastrous military career as First Lord of the Admiralty at the time of the Gallipoli campaign. But it was Churchill's penchant for warning fellow politicians of threats they otherwise preferred to ignore that has perhaps endeared him most to military strategists.

Interestingly, none of the military analyses of long terms threats that I've read recently are concerned with financial crises and sovereign debt problems. Except perhaps to the extent that such economic developments might accelerate or exacerbate other, more significant forces shaping the long term future. One such force that I've mentioned before is Peak Oil. The chart is from a fascinating report on NATO's Multiple Futures Project. Their conclusions are that resource constraints will be the predominant source of geo-political and military conflict in the future. NATO specifically analyses the multiple impact of peak oil because of its perceived significance. Intriguingly, just as President Obama threatens a ban on further deep sea oil drilling post the Deepwater Horizon disaster, the U.S. Department of Energy has revised its global forecasts for oil production downwards - even recording a recent global peak that others speculate may be more permanent than the Department projects.

Here in Ireland, Feasta has recently provided an excellent analysis of the implications of peak oil. The good news: we don't have to worry about climate change since CO2 emissions will collapse with oil consumption. The bad news: so will everything else. Though I'd give human ingenuity a little more credit than the authors do - but I don't doubt the difficulty of the energy transition facing us.

Separately, the U.S. Joint Forces Command (USJFCOM) has recently published the Joint Operating Environment (JOE) 2010 report, and it too warns about the medium term threat posed by peak oil (along with quite a few other threats). It is less than optimistic about the task of finding from new sources the equivalent of Saudi Arabia's current output of crude oil every seven years between now and 2030. But do read the entire report (though maybe not before bedtime). It's one of the smartest and most insightful reports I've read in a long time, and contains jaw-dropping facts such as the China's People's Liberation Army now has more students in America's graduate schools than the U.S. military...

But beyond identifying future threats, one of the key themes emerging from strategic military thinking is the Battle of the Narrative. This is the modern day version of 'hearts and minds', and is described by NATO strategists as "coherent messages and an engagement strategy that reflects strategic goals and supports core values, ideas, missions and operations". This is where military strategy blurs into political strategy. For Ireland or the European Union or Western Democracies generally to survive and thrive they must have a competing narrative about the future. One that is compelling not only to their own citizens but also to the citizens of the BRIC economies and Africa who must navigate the same resource constraints as we will in the decades ahead.

Yet another tragedy of the current (mainly Western) economic crisis is that such a narrative is no longer articulated let alone very credible. As the military thinkers keep pointing out, the inability to successfully engage in the Battle of the Narrative will severely weaken our capacity to successfully deal with all the other challenges that we face. But at least someone is thinking about it.