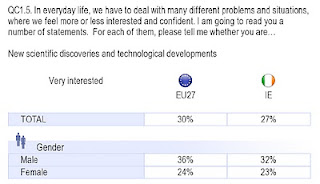 Yesterday's Eurobarometer report on European attitudes to science isn't very encouraging for those trying to build a Smart Economy here in Ireland. Especially as Irish interest in science is below the EU level (though by no means the lowest). Meanwhile pagans celebrating the summer solstice at the Hill of Tara claim the M3 motorway has created negative energy around the site. Oh dear.

It's an amusing juxtaposition of course. Less amusing is the irrational and unscientific nature of Irish media coverage of the Eurobarometer findings. For there is one, defining feature of attitudes towards science they have chosen to ignore, and that is that women are far less interested in science than men - right across Europe and not just in Ireland as the chart shows. But there isn't a single mention of this 'scientific fact' anywhere. Even the authors of the Eurobarometer report seem somewhat embarrassed by the findings as they launch into a slightly bizarre 'interpretation' of the gender science gap thus:

In general, men more often express interest than women in all the issues and particularly when it comes to sport, 41% of men compared to 10% of women are very interested. However, when it comes to culture and arts the opposite is the case: women are more interested than men (23% vs. 16%, respectively).

A rather bizarre comment since the survey they are reporting didn't cover 'sport' or 'cultural' issues. Perhaps they were afraid of suffering the same fate as Larry Summers - the unfortunate ex-President of Harvard who foolishly pointed out the scientific facts about gender and science. Silly Larry, did he not anticipate the negative energy such a statement might unleash? Still, as a man of reason and science he called it as he saw it: everyone is entitled to their own opinion, but not to their own facts. Reassuringly for believers in freedom and reason everywhere, some are still daring to discuss the gender science gap.

What is intriguing from the Eurobarometer findings is that even in the countries we are regularly told we should model ourselves on - Sweden for equality and Finland for education - the gender science gap is even bigger than it is in Ireland. Of course, the inevitable reaction to the comparative lack of interest in science among women - and their absence from much of scientific academia and enterprise - will be to blame it on men. Yep, it's a patriarchal conspiracy, denying us the next Einstein, whomever she is. And so there'll be lots of huffing and puffing and investigations and calls for quotas for female scientists and so on... and it won't make a blind bit of difference. It hasn't in Scandinavia.

So will our politicians, academics and policy makers be scientific about science policy: and focus on ensuring that all our young people who are keen to pursue careers in science - and they will predominantly be young men - will be able to do so? Or will they stand shoulder-to-shoulder with the latter day druids on the Hill of Tara and their magical thinking and irrational faith in their ability to change human nature by insisting on equalising the gender science gap? Sadly I suspect that magical thinking will always be with us.
Posted by Gerard O'Neill at Tuesday, June 22, 2010