Ireland and the Ten Commandments 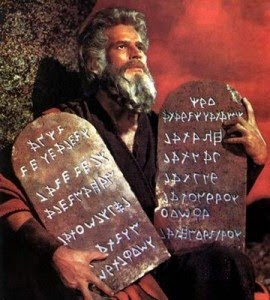 I'm referring, of course, to the Ten Commandments for Fiscal Adjustment in Advanced Economies recently revealed by the International Monetary Fund. Like the original ten commandments, the IMF's are open to interpretation. Here's my interpretation of what they mean for Ireland:

Commandment I: You shall have a credible medium-term fiscal plan with a visible anchor (in terms of either an average pace of adjustment, or of a fiscal target to be achieved within four–five years).

We're not there yet, and I don't see any Irish government voluntarily adopting one, but it could be one of the key benefits of a Fiscal Council for Ireland.

Commandment II: You shall not front-load your fiscal adjustment, unless financing needs require it.

Unfortunately we have to do just that thanks to rising spreads on Irish bonds (5.6% yesterday or almost 3 percentage points above German bond rates) - which threatens to wipe out the deficit corrections achieved via spending cuts.

Commandment III: You shall target a long-term decline in the public debt-to-GDP ratio, not just its stabilization at post-crisis levels.

Our debt-to-GDP ratio is getting alarmingly close to the 90% level (depending on how you measure it), which puts us in the 'no-way-back' danger zone where we can no longer 'grow our debts smaller'. I think we should target a return to the ratio of just three years ago: closer to 30%. We're still a young'ish country with capacity for above average growth so we can do it (and should, before structural pressures such as an ageing population are upon us). Frankly, if we don't set ourselves a tough target we risk our debts exploding in the other direction.

Commandment IV: You shall focus on fiscal consolidation tools that are conducive to strong potential growth.

The IMF says target current spending, which makes sense up to a point. But they don't mention capital spending (which I would define to include R&D and education) which is a fiscal tool that is more conducive to strong potential growth than tampering with social welfare entitlements. It seems both the Left and the Right in Ireland are in agreement on the capital spending priority.

Commandment V: You shall pass early pension and health care reforms as current trends are unsustainable.

It goes without saying, but it still remains unsaid by most of our elected representatives. The obvious place to start is with public sector pensions, but to quickly extend this to our increasingly dysfunctional private sector pension operations. We have a demographic 'buffer' here in Ireland that others don't have - we should take advantage of it: for our grandchildren's sake.

Commandment VI: You shall be fair. To be sustainable over time, the fiscal adjustment should be equitable.

Sure, I'll pay more tax if it doesn't end up going to looters of the public coffers like Callely.

This is critical for Ireland. As the IMF points out:

Commandment VIII: You shall strengthen your fiscal institutions.

Which in our case means letting the European Commission and the ECB have more say in our budget setting practices. In an ideal world I'd prefer they didn't, but then in an ideal world we wouldn't have had Brian Cowen as Minister for Finance when the wheels were coming off the economy...

Commandment IX: You shall properly coordinate monetary and fiscal policy.

This is one Commandment that doesn't apply to us since we joined the eurozone. But of course we can always rely on the ECB to do the right thing by us in terms of monetary policy. Won't they?

Commandment X: You shall coordinate your policies with other countries.

Again we don't have much say in this one. Though perhaps instead of coordination we can simply be an inspiration to others?


So there you have it. But as with the original ten commandments, it's much easier to learn them than it is to live by them. Who will be our Moses?
Posted by Gerard O'Neill at Saturday, June 26, 2010