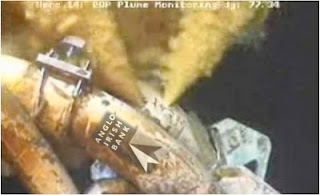 Is Anglo Irish Bank Ireland's Deepwater Horizon - BP's ill-fated oil rig in the Gulf of Mexico? The thought struck me at the news that the government (i.e.: you and I) are going to try and stem the toxic flow from Anglo Irish Bank by adding another €2 billion to the national debt. As financial 'top kill' goes I'm not convinced it's the last we'll hear of the problem.

But of course there's a major difference between BP's and Anglo's problems:

...when BP screws up we make sure they pay every dime in damages, but if a bank screws up we bail them out with taxpayer money.