The Limits of Politics

The more optimistic they were under the illusory prosperity of the boom, the greater is their despair and their feeling of frustration. The individual is always ready to ascribe his good luck to his own efficiency and to take it as a well-deserved reward for his talent, application and probity. But reverses of fortune he always charges to other people, and most of all to the absurdity of social and political institutions. He does not blame the authorities for having fostered the boom. He reviles them for the inevitable collapse. Mises

Will the next Taoiseach please stand up? The media are having one of their occasional frenzies over the all important question of who will lead our two main political parties. Except it's not all that important. Sure the current incumbents have their strengths and weaknesses, and new incumbents would bring to bear other strengths - and weaknesses. But that's not the point. As detailed in the bank inquiries, there is nothing to indicate in the past and present behaviour of all the political parties, the social partners and the various other boosters for the boom that simply changing the man in charge will really make all that much difference.

Indeed, the real problem is the 'man-in-charge' fallacy. As Bill Easterly put it previously:

This a fallacy simply because: there is no Man in Charge of the global economy. There never has been, and there never will be. There is no Man in Charge of any national economy either. This is not about the debate about the role of government vs. markets, this is simply a statement of fact. There are government leaders, to be sure, but they are only one among many different power centers in the political system, society, and in the economy, all with sharply conflicting interests and tools to effect change, and so any individual leader has very limited power to change things. This is true of both authoritarian and democratic systems. You may want one of those leaders to act on a particular problem, which is fine, but you should not think that leader is the Man in Charge.

If anything, the recent crisis in the eurozone and the resultant expansion of ECB and European Commission powers (including the 'supervision' of domestic economic policies) suggests that whomever will be the next Taoiseach will have even less say in the economic direction of this country than any of his or her predecessors. Oddly enough, a large proportion of Irish citizens not only want this to happen, they even expect it to happen. Take a look at the chart showing the expected shift in influence of various institutions in the daily lives of Irish people by 2020: 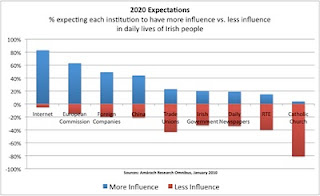 Most of the influences expected to make more of a difference in our lives will be from outside of Ireland. This won't be an entirely positive outcome: the worst legacy of the financial disaster we are still reeling from will be the loss of real sovereignty and with it the freedom of manoeuvre that would otherwise have been ours as a nation. So enjoy all the politicking and the breathless coverage from the pol-corrs for the entertainment that it provides. For its entertainment value may be all that's of any consequence thanks to the mismanagement by the present incumbents and their predecessors.
Posted by Gerard O'Neill at Sunday, June 13, 2010