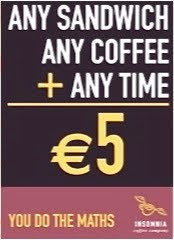 I was listening to Bobby Kerr talking about his pricing strategy at Insomnia the other day. Bobby was speaking at the An Post Driving Success roadshow (along with yours truly and a great line up of other speakers). He explained that their special offers had had the desired effect: footfall and volume were holding steady, despite the recession. His only problem was turnover: cutting prices meant cutting revenue, even with volumes holding up.

I've heard the same story from a number of other clients who have recently seen volumes grow (for the first time in a long time in some instances), but turnover is either flat or still falling because of price pressures. Deflation to you and me. And sure enough, today's retail sales data confirms that Bobby's is not an isolated experience: retail volumes are up year-on-year (for the first time in over two years), but the value of retail sales is still falling (if you exclude the motor trade).

Instead of 'stag-flation' - rising prices but falling volumes - we appear to be experiencing 'de-spansion' - falling prices alongside expanding volumes. This is unprecedented (outside of the IT sector) and it is forcing many businesses to reconsider their growth/survival strategies. Service businesses like Bobby's have had to work hard to reduce their costs of doing business - whether renegotiating (downwards) their rents, or simply working harder with fewer resources (including people). This is undoubtedly good news for consumers in so far as the prices of things they want to buy are continuing to fall. But is isn't such good news for employees since their prospects for pay rises (or for jobs in the case of the unemployed) are constrained by the downward pressure of deflation on revenues.

Nor is 'de-spansion' good news for the economy's growth prospects so long as interest rates remain so high. And they are extremely high when measured in terms of price trends (since interest rates are always positive but prices are still falling) or in terms of the loan margins banks are charging in light of their own borrowing costs. An Irish business borrowing money today would need to be extremely confident of growing sales by 10% and more with the money they borrow for machinery etc in order to justify the cost (and risk) of borrowing. That's bad news for consumers because the things they will want to buy in the future won't be available due to a lack of new business investment.

Indeed, with the (very recent) exception of motor sales, there isn't a single retail sector experiencing growth in sales values anywhere close to 10% according to today's CSO report. In fact sale values are still falling in 10 out of the 13 sectors surveyed. But volumes are rising in 7 out of 13 sectors. So something is driving growth. Some of it is straightforward 'bargain hunting' by consumers who now see their money going a lot further. Our population is also continuing to expand: and the normal replacement cycle for certain categories such as cars is kicking in again after the shock of last year's unprecedented collapse in demand. These things can support some volume recovery in the near term. However, in the medium to longer term, it may turn out that 'de-spansion' is the exception and that an oil-price fuelled return to stag-flation may be the more likely outcome in the months ahead.

Nevertheless, it would be a brave business owner who decided to put his prices up in the face of continuing deflationary pressures. The special offers will be with us for some time to come.
Posted by Gerard O'Neill at Friday, June 11, 2010