Ivor Callely ('working for you') is to the common good what Silvio Berlusconi is to traditional family values. Mind you, I'd prefer Silvio for Taoiseach than the current incumbent - at least it would be more entertaining. But just as the Italians have a soft spot for Silvio, we've always had a soft spot for the chancer or the cute hoor in Ireland - someone seemingly getting something for nothing: 'sure we'd all do it if we had the chance'.

It's a very Irish version of The People's Romance - if the crime doesn't have a victim then it's not a crime, right? But just as children have to learn that 'money doesn't grow on trees', so eventually must electorates learn that the people you elect to represent you may not have your best interests at heart. Meet the agency problem again.

As another politician - Al Gore - reminds us, even the longest standing romance can sometimes simply fade and end. And the Irish people's romance with the Val Falveys running about Leinster House is surely coming to an end as well. And not just with politicians - the chart below charts a decade of collapsing trust in major Irish institutions, private as well as public: 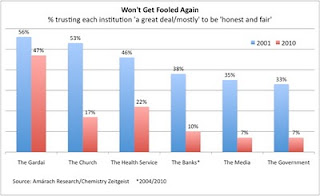 Of course the Irish people are not alone in their waning romance with politicians. The following table (Table 31a in the recent Eurobarometer survey) puts our 'relationship difficulties' in an international context (click on image for greater detail): 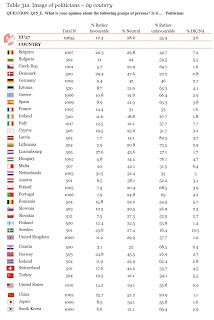 In no country does anything like a majority of its citizens actually have a favourable impression of its politicians. Sure, some of this may well be an inevitable reaction to the economic/financial/sovereign debt crisis that is still unfolding. But could it also be a dawning realisation that majoritarian democracy as currently exercised may actually be a root cause of the crisis? Might political romance turn to bitter acrimony?

For people like me who value the freedom that we retain and enjoy here in Ireland I find the unfolding crisis of representative democracy quite disturbing. Too often people pulling away from unhappy relationships end up in even unhappier ones 'on the rebound'. The key issue is trust. Without trust between citizens and our representatives then the capacity to solve our shared problems becomes severely weakened. The following chart (which is oriented towards the commercial world of trust between businesses and customers) nevertheless captures the vital importance of high trust:

When the degree of trust is low then the willingness of citizens/customers to support risky but vital changes will also be low to non-existent. Which is why the poison leaking into Irish democracy from one expenses scandal after another is so dangerous. We need a high degree of trust in order to tackle the enormous problems that we face. Though as Silvio shows, that can be a slow, difficult and sometimes futile task. Sometimes divorce - or removing the party whip - is the best alternative for everyone concerned.
Posted by Gerard O'Neill at Sunday, June 06, 2010