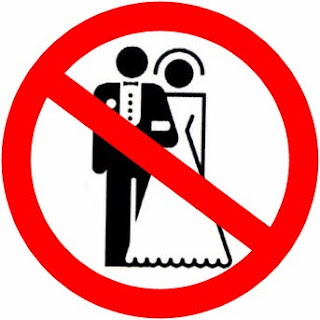 The Dutch have finally figured that encouraging the institution of marriage makes a lot of economic sense. Or at least two villages in the Netherlands have anyway:

...two villages are hoping to reduce their welfare rolls through strategic marriages: “The local social service departments are paying for the women to have a make-over in the hope they can hook up with a rich husband to support them.” Participants in the scheme will receive tips on hair, wardrobe and social and presentation skills.

Funny that, because so much in the way of welfare practice here in Ireland (and social legislation generally) has been about weakening the value of marriage rather than strengthening it. Marriage has become a lifestyle choice rather than an important component of Irish culture and society, as I've noted once or twice before. We are not unique in this regard, of course. Still, the Dutch development is interesting. Economic reality has an unfortunate habit of derailing most utopian ambitions and the idea of the state as 'nanny' (or 'sugar daddy', more like) - meeting all the needs of its citizens for protection from the consequences of bad choices and bad luck - is rapidly approaching the missing bridge. Accelerated by obscene levels of corporate welfare for financial institutions I might add.

But it isn't just about economics. We are in the closing stages of a clash between the culture of monogamy and the culture of polyamory, one that has its origins in several key developments in the last century - from the pill to labour market trends to hypergamy. A very expensive clash at that: much of the expansion of Europe's welfare states has been in response to the fallout from a shift from cheap monogamy to expensive polyamory. But we shouldn't blame it all on the Sixties. I agree with Frank Ferudi (in an interesting article on the 'permissive society') that perhaps the real problem is our collective inability to pass judgement on other people's behaviour:

Sadly, the ideal of being ‘non-judgmental’ allows far too many people to evade their responsibilities for making judgment calls about different aspects of their lives. Hiding behind morally illiterate ideals of being ‘non-judgmental’, ‘inclusive’ or ‘diverse’ has fostered a climate where far too many people can dodge the burden of authority for their own choices. Why? Because if we’re discouraged from being ‘judgemental’, and lectured that there are no ‘right answers’ or ‘right relationship’, then the exercise of choice becomes pointless. And yet if choices are deprived of moral meaning in this way, because no choice is any better than another, then we become disenchanted from exercising our freedom.

What has been lost is the awareness that the freedom we have cherished in the West can only be sustained if we reinforce the connection between freedom of choice with responsibility for the consequences of choice. A connection made famous by another Dutchman - Spinoza - back in the 17th century. It seems some 21st century Dutchmen are re-learning the lesson he once taught.
Posted by Gerard O'Neill at Saturday, June 19, 2010