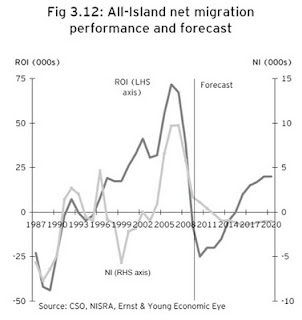 The latest economic outlook from Ernst & Young contains several interesting forecasts. The one that got my attention was for migration: they see a return to net inward migration in the Republic of Ireland by 2015, though no such return in Northern Ireland. This seems plausible given the rapidly falling population of twenty-somethings in Ireland and the likely demand for immigrant labour to make up of the shortfall.

Ireland's experience of immigration has been remarkably benign in comparison to several other countries: I don't expect that to change, despite some of the gloomier prognostications (or wild extrapolations) about Europe's future and the impact of (mainly Muslim) immigration. Nevertheless, we are seeing significant changes in Irish attitudes to immigration. I recently updated research first conducted in 2008. I have summarised the main results below.

The first chart shows Irish people's perceptions of the impact of immigration on Ireland. Back in 2008, a majority of adults felt that immigration - on balance - had been good for Ireland: against a much worse economic background opinion has turned more negative: 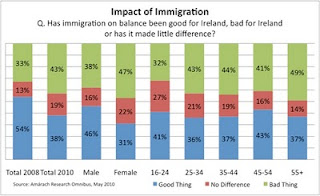 A key question two years on from the first survey is the extent to which immigrants are perceived to have integrated into Irish society. Here the trend is more polarised - although more Irish people now feel that immigrants are completely integrated than two years ago, the proportions who feel that integration will proceed no further or hasn't even begun have risen sharply: 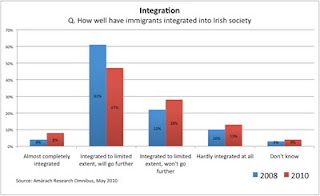 However, beyond the integration of existing immigrants, a key issue is that of policy towards future immigrants - especially in light of the Ernst & Young forecast. Back in 2008, the vast majority of Irish people wanted stricter immigration policies in light of the then economic situation. Not surprisingly, that continues to be the predominant view - though there has been a significant growth in the percentage who are satisfied with immigration policies as they currently operate (and a collapse in the percentage seeking fewer restrictions): 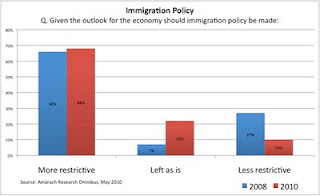 All of this suggests to me that the greater part of Irish attitudes are coloured by prevailing economic conditions (as they no doubt are elsewhere), and that a much more benign economic situation in a few years time will likewise see a more relaxed attitude towards inward migration. However, the issue of integration risks becoming a more problematic one: which is why not giving asylum seekers the right to work (without prejudice to any subsequent decision to approve or reject their asylum application) is unfortunate. It will serve only to reinforce perceptions of (some) immigrants as 'spongers', and lock the same asylum seekers into a cycle of welfare dependency in the even their applications are approved.

Let's hope our relatively benign experience of immigration remains benign when the recovery kicks in.
Posted by Gerard O'Neill at Wednesday, June 02, 2010