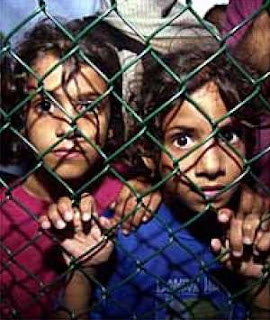 Ireland is no long a 'soft touch' when it comes to asylum seekers. Data from Eurostat released today shows that only 7.8% of applications by asylum seekers were approved - compared to an EU average of 19.2% (and 30% next door in the UK).

In Ireland, approval of asylum applications on the first instance of application are down from 30% in 2008 to 4% last year: the latter rises to 7.8% on appeal. We're not the lowest, mind you: Belgium, Spain and Norway are significantly lower. And Estonia seems to have a 'zero tolerance' thing going with refugees right now...

The numbers seeking asylum in Ireland are also down (from 7,250 in 2008 to 6,560 last year). So a lower rate of approval applied to a falling number means that asylum seekers account for a trivially small share of foreign nationals taking up residence in Ireland. Despite more negative attitudes towards immigration in Ireland in recent times, it seems unlikely that asylum seekers will be a source of concern for the foreseeable future.
Posted by Gerard O'Neill at Friday, June 18, 2010