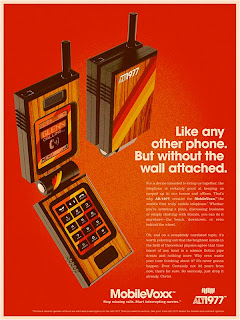 People's views about the future are really a 'Rorschach-like' revelation of their views about the present. That's what struck me reading the latest Pew research on how Americans imagine American life in 2050. Even looking ahead 40 years, they anticipate a gloomy outlook for jobs, retirement and standards of living. Though the outlook isn't entirely negative: the innate optimism of the American people leads to a consensus that life, thanks especially to technology, will nevertheless be better.

I suspect a poll of Irish attitudes about the future would reveal a similar mix of economic pessimism and technological optimism. But as I've said before, we don't do futures thinking well in Ireland, despite the best efforts of writers like Stephen Kinsella. Inevitably we can't help but view the future through the prism of the present.

Still, you can have fun with our 'present-centrism' by re-imagining the past through the prism of the present. The image is from an ingenious journey into the past - 1977 to be precise - by designer/artist Alex Varanese (ht: PSFK). For those of us who lived through the 'decade that style forgot', his 1970s take on 21st century technologies is truly delightful. My teenage years would have been a lot more fun if this stuff had been around back then.

Mind you, our technological advances since shouldn't make us feel too superior towards the past. There are some people who think that the 1970s marked the peak of human capability and that civilisation has been sliding backwards ever since. Which is one (albeit small) consolation for those of us old enough to have been around to see it when it happened...

Maybe it's our retro present we should be worrying about?
Posted by Gerard O'Neill at Thursday, June 24, 2010