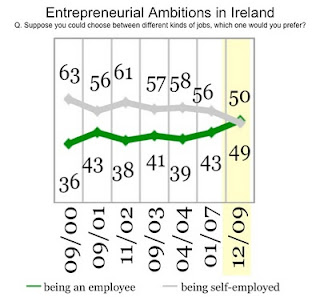 Just when we need more people to start up businesses in Ireland it appears that our appetite for entrepreneurship is waning. That's according to a fascinating Eurobarometer Report comparing attitudes towards and experiences of entrepreneurship across the EU27 countries, EFTA countries and the USA, China and South Korea. Whence the chart which shows Irish people's preferences for 'being an employee' versus 'being self-employed': the former has surpassed the latter for the first time.

Perhaps we shouldn't be surprised at a 'flight to safety' resulting from our economic depression and the resultant collapse in appetite for risk. Except that not all countries in recession are experiencing such an inversion (see Table 1a in the report), e.g.: a higher proportion of French people would prefer to be self-employed than Irish people (then again, they did give us the word 'entrepreneurship').

What's stopping those Irish people with a desire to be self-employed therefore becoming entrepreneurs? Sadly - and uniquely among all the countries surveyed - the number one barrier is 'the risk of losing your property': cited by 27% of Irish people (and higher even than 'the uncertainty of your income') - see Table 25a. Another factor is finance: Ireland tops the international league table when it comes to the percentage who think that 'having the necessary finance in place' is a vital pre-requisite to starting up a business.

But it isn't all negative. Indeed, Irish attitudes towards entrepreneurship are still amongst the most positive in Europe. For example, I've charted the data showing the percentages of people in Ireland, the EU27 as a whole, and the United States who have a 'rather favourable' image of entrepreneurs, comparing the same 'rather favourable' image scores for other professions: 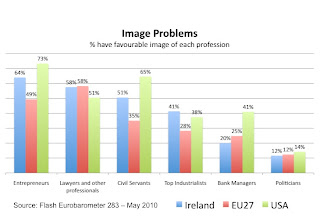 We're definitely more Boston than Berlin when it comes to our entrepreneurial 'ethos' it seems (and we're even more likely than Americans to say that those whose businesses have failed should 'be given a second chance'). Better still, we aren't afraid to take on the world when it comes to doing business. A final section (Section 8.1) of the Eurobarometer survey includes a fascinating comparison of attitudinal descriptors such as 'in general, I am willing to take risks'. Ireland does very well when it comes to such attitudes - including the chance to compete with others: 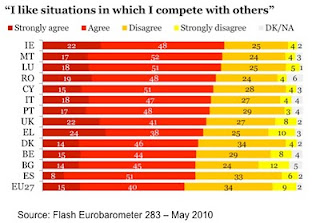 This is a hugely important report on an area I've blogged about often. Not everyone is cut out to be an entrepreneur, and not everyone who wants to be an entrepreneur should necessarily be encouraged to become one. But is important that those who shape the entrepreneurial landscape in Ireland (academics, policy makers, bankers and - yes - even expense-inventing politicians) are informed by the many insights contained in this report. We simply won't have a recovery until we regain some of our entrepreneurial (and 'intrapreneurial') zeal.
Posted by Gerard O'Neill at Friday, June 04, 2010