God loves a tryer, and Anglo Irish Bank is certainly that. Though once again, their choice of sites for their online advertising leaves something to be desired, to say the least. This is from the online edition of today's Daily Telegraph - the Anglo ad appears alongside an article on the flight of eurozone savers to Swiss bank accounts: 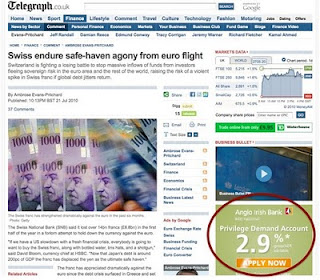 The strapline for the Anglo ad is:

Safeguard the future for everything you hold dear.

So let me see, rather than move your shrinking savings to a bank account in Switzerland (budget deficit just 1pc of GDP; gross public debt at 40pc; a current account surplus of 9pc; unemployment at 3.9pc; and its 8 million citizens own half a trillion dollars of external assets)... you should move them to Anglo Irish Bank instead. To safeguard the future of everything you hold dear.