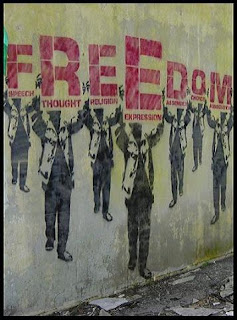 We hold these truths to be self-evident, that all men are created equal, that they are endowed by their Creator with certain unalienable Rights, that among these are Life, Liberty, and the pursuit of Happiness. That to secure these rights, Governments are instituted among Men, deriving their just powers from the consent of the governed.

From America's Declaration of Independence - signed on this day, 234 years ago. The first sentence is probably familiar to you. The second one less so - for it is the more radical of the two. The authors of the Declaration (mostly credited to Thomas Jefferson) were determined not to let an independent, American government simply replace one repressive regime with another. Here is the rest of that paragraph:

That whenever any Form of Government becomes destructive of these ends, it is the Right of the People to alter or to abolish it, and to institute new Government, laying its foundation on such principles and organizing its powers in such form, as to them shall seem most likely to effect their Safety and Happiness. Prudence, indeed, will dictate that Governments long established should not be changed for light and transient causes; and accordingly all experience hath shewn, that mankind are more disposed to suffer, while evils are sufferable, than to right themselves by abolishing the forms to which they are accustomed. But when a long train of abuses and usurpations, pursuing invariably the same Object evinces a design to reduce them under absolute Despotism, it is their right, it is their duty, to throw off such Government, and to provide new Guards for their future security.

Americans have always had a healthy vigilance about their government. Most of them anyway. Their own history shows what happens when 'a long train of abuses' leads to the usurpation of basic rights. Right up to the current incumbent in the White House, who presided over a four-fold increase in the remote killing of suspected terrorists with drones since coming to power. Along with the collateral killing of 1-2 innocent civilians for every 'legitimate target'. But of course Obama is a Democratic from an ethnic minority background, which gives him effective immunity in the eyes of Ireland's commentariat. Where have all the Shannon protesters gone?

But coming back to 'the consent of the governed': have you given your consent recently? Do you remember, for instance, voting for a Fianna Fail/Green coalition at the last election? Funny, nor do I. And yet here we are with a government that refuses to let public sector employees exercise freedom of conscience, to let people living in the countryside to hunt, and intends to prevent parents from smacking their children.

So far it doesn't add up to 'a design to reduce them under absolute Despotism', but the direction seems fairly unambiguous. It's a direction that gives government more power over the private lives of citizens, especially over the lives of families. Such, of course, has been the ambition of all ideologues down through the centuries - Marxists, National Socialists, Feminists, Islamists and Environmentalists. For the family is a refuge of privacy - away from the all-knowing, all-seeing gaze of government. And ideologues hate that: for without control they don't have power, and without power they cannot reshape people and society into the utopian plan they have for us. For our own good, of course.

But these things go in fashion. And given the propensity of our leaders to ape the latest fashion in social and other policies from our neighbours across the water then we have grounds for optimism. Their new coalition government has launched a website - Your Freedom - which invites UK citizens to advise their government on how best to restore freedom:

We're working to create a more open and less intrusive society. We want to restore Britain’s traditions of freedom and fairness, and free our society of unnecessary laws and regulations – both for individuals and businesses.

This site gives you the chance to suggest how we can do this. Your ideas will inform government policy and some of your proposals could end up making it into bills we bring before Parliament to change the law.

I think this is a remarkable development, and a harbinger of a new relationship between government and citizens that is very much in keeping with the spirit of the Declaration of Independence. Will we see its like in Ireland? I wouldn't hold my breath - our present incumbents are too wedded to the wielding of power to ever voluntary reduce it. But ideas can spread - as did the idea of freedom from tyranny in 1776 - and I am hopeful for freedom's future.