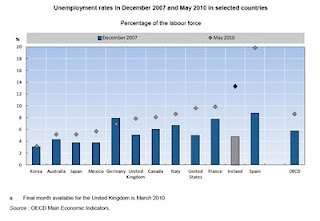 I never thought I would say it, but Willie O'Dea TD is right. He proposes in today's Sunday Independent that:

We should be seriously considering a scheme here where 100,000 people on the dole could be paid an extra €100 per week for the next 12 months to undertake vital work in their community. The work should match the people to their existing skills and training -- whether that is in IT or building. It would be a social work programme, not a social welfare one.

There are three reasons I agree with Willie. The first is the speed and scale of the unemployment shock we have experienced here in Ireland. This is illustrated in the chart from the recent OECD Employment Outlook 2010. We will need to create over 300,000 jobs just to get back to 2007 levels. That won't happen any time soon, so initiatives such as the proposed scheme have value simply as stop gap measures (subject to their not actually delaying recovery in the job market). The second reason is the dire consequences for the unemployed themselves of prolonged inactivity. According to a recent Gallup survey, there are significant differences between those unemployed for three months and those unemployed for six months in terms of their physical and mental health. The data doesn't cover the long term unemployed: who number over 90,000 in Ireland.

The third reason is the unique nature of Ireland's unemployment shock: we are experiencing the most severe 'mancession' of any country in Europe (a fact that remains virtually unreported by Ireland's MSM) - and initiatives like O'Dea's have the potential to directly tackle some of the problems facing unemployed men of all ages. Problems that include ill-health, lost skills and social isolation.

There are risks with initiatives modelled on the Works Progress Administration, as proposed by Willie O'Dea. The first is market distortion - the risk that such initiatives crowd out otherwise viable private sector initiatives. The second is political distortion - with politicians vying to secure a larger share of the pie for their constituencies (not in Ireland surely?) The third is bureaucratic distortion - think Fás. I believe some of these objections can be dealt with if the initiative is of a mandatory, fixed duration (24-36 months), with a requirement to terminate it sooner should the unemployment rate fall below, say, 10%. Unlikely I suspect. And I think the intelligent application of crowd-sourcing technologies (including skills-sourcing, resource-sourcing, work-sourcing etc) will help make it more efficient and cost effective.

In the medium to long run we will need to ensure that domestic distortions to labour force participation are removed (such as the minimum wage, one of several distortions identified by the OECD), as well as European distortions (including the task of completing the Single Market). But the risks we face if we do nothing in the short term warrant the type of initiatives proposed by O'Dea. There, I said it.
Posted by Gerard O'Neill at Sunday, July 11, 2010