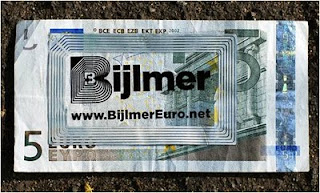 It's official: Christian Nold is a genius. I know I've sung his praises before, but his latest initiative - the Bijlmer Euro - goes way beyond even his past achievements. The idea is ingenious but simple - the best ones usually are. He has created a new currency that turns euro bank notes into 'smart cards' that reward loyalty and track usage.

The smart technology comes from used tickets from Amsterdam's public transport system which contain RFID-tags. These tags are recycled by sticking them on euro notes, along with a Bijlmer logo that users download and print out. The euro notes are used just like ordinary cash, but the big difference is that Nold has joined forces with local businesses in the Bijlmer area of Amsterdam to offer special deals to those using the notes. It's a 'local currency' that's legal tender. He has given participating businesses equipment to record the usage of the notes so transactions can be monitored and mapped. Literally the velocity of money - available in real time.

Here's how Christian pitches it:

The Bijlmer Euro is a Parasitical Currency that piggybacks on the ubiquity of the Euro as a vehicle for its own mobility. A Bijlmer Euro is worth more than a normal Euro because it carries local trust and good will.

Like I said, the guy's a genius. I expect to see a lot more initiatives like the Bijlmer Euro. Richard Douthwaite has written evocatively about the local currency schemes that flourished in Europe during the Great Depression. It's happening again only this time I don't think the central banks - even the ECB - can crush it like they did in the 1930s.