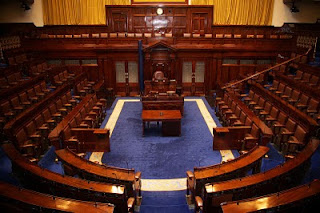 Democratic parliaments are not forums where debates take place, but rather where popular absolutism registers its decrees.
Nicolás Gómez Dávila

'Don Colacho' is fast becoming my favourite reactionary. A reactionary in the best, Burkean sense: someone who refuses to run with the crowd, braying the latest politically-correct nostrums. He had a skeptical view of politicians in general, and it is one I expect will become increasingly popular in the months and years ahead. Here in Ireland we have witnessed the by-now-annual disapproval of our politicians' holidays. And once again I find myself in a minority of one in wishing they took longer holidays. Say 365 days a year, showing up every February 29th to collect their expenses. It would get my vote...

Perhaps it's just as well they've gone on holiday. In recent week we've seen all too much of the 'parliamentary absolutism' that Don Colacho warned us about: prioritising stag hunting over the economic crisis; and forcing through a civil partnership bill that will re-engineer family life in Ireland. And there's more absolutism to come, of course. Noel Whelan gives us a flavour in relation to the issue of gay marriage when he observes in today's Irish Times that:

Many politicians and gay rights advocates wish to go further but reluctantly accept that providing for gay marriage itself is currently beyond the capacity of the political system to deliver.

Translation: the Irish people aren't ready just yet to lift their knuckles of the ground long enough to tick the 'Ta' box in a referendum, but don't worry, we're on the case and the task of creating an 'equality heaven' here on Earth will not be stopped. Or something like that, but you get the drift.

The good news, for those of us who long for freedom from the absolutism of our intellectual and ethical betters (when they're not on holiday), is that help is at hand. Or online, to be precise. The Americans, as ever, are ahead of us with their growing passion for the potential of Gov 2.0: using the tools of social networking, like Facebook, apps etc to crowd-source ideas and solutions that will break us out of the economic and democratic deficit facing every government in the developed world. The UK government are even crowd-sourcing ideas for cost savings in the public sector - open air government indeed.

The brilliant Imagining the Internet project has recently published a paper on The Future of Institutions and the Internet (Report 2) which notes that:

The imperatives and expectations created by the internet will force change in institutions, no matter how resistant they are. There is simply too much pressure from the ground up for institutions to remain as they are. Media companies are classic examples of organizations that have to respond to the new digital realities. The place all institutions will have to start is listening more intently to their stakeholders. “Molecular democracy” is asserting itself.

The experts surveyed in the report expect government to lag business in responding to these new imperatives. However I suspect as more governments are mugged by reality then they will be forced sooner rather than later to seize the potential of Gov 2.0. One outcome I foresee will be an end to the need for irregular gatherings of expense-claiming representatives in legacy chambers from a bygone age. Soon they will be able to log in (from their holiday homes no doubt) and vote virtually, assuming decisions have not already been devolved to the communities and regions better able to deal with most issues. If a choir can do it, why not a Dáil?

Of course, the tools of Gov 2.0 can be used for evil as well as good, or as Don Colacho put it: "In politics we should distrust even intelligent optimism and trust in the imbecile’s fears." Fear and anger make interesting bedfellows and they will play a key part in shaping the Irish people's response to the ongoing failure of our 19th century model of parliamentary democracy. Their anger at the failure of our politicians to deal with the real issues affecting the daily lives of our fellow citizens will give way to a fear that the same politicians are simply not capable of dealing with the issues.

That is when the necessity of effective reform will become mother to a new type of politics, one that doesn't even need politicians (most of them, of the time, anyway). Don Colacho would have approved.
Posted by Gerard O'Neill at Saturday, July 10, 2010