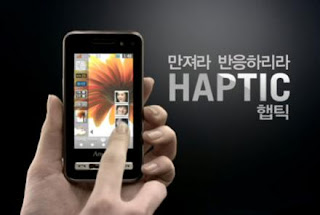 If reports about the long term future are an indicator of imminent economic recovery then rejoice: the green shoots of futurism are bursting into bloom all around us.

Take The Next 40 Years from the Smithsonian - all good, speculative stuff. My favourite contribution, not surprisingly, is by Kevin Kelly. Here he is on our haptic future:

Touch screens respond to the ceaseless caress of our fingers. Sensors in game consoles such as the Nintendo Wii track our hands and arms. We interact with what we see. Soon enough, screens will follow our eyes to perceive where we gaze. A screen will know what we are paying attention to and for how long. In the futuristic movie Minority Report (2002), the character played by Tom Cruise stands in front of a wraparound screen and hunts through vast archives of information with the gestures of a symphony conductor. Reading becomes almost athletic. Just as it seemed weird five centuries ago to see someone read silently, in the future it will seem weird to read without moving your body.

Reading as an athletic activity, who would have thought?

And if 2050 seems too far away from you (though it's now as close as 1970 in your individual timeline if you happened to be around then), why not check out the future in 2030? Specifically the global economic outlook. It's a lot more sober (and a lot less fun) than the Smithsonian version, but then again, what do you from an association of accountants? :)

Still, if even the accountants are looking ahead twenty years then maybe things really are on the up?
Posted by Gerard O'Neill at Tuesday, July 13, 2010