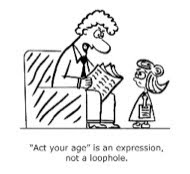 I love this quote from Robin Marantz Henig's NYT piece on the arrested (or at least, glacially slow) development of today's Twenty-Somethings:

The 20s are like the stem cell of human development, the pluripotent moment when any of several outcomes is possible. Decisions and actions during this time have lasting ramifications. The 20s are when most people accumulate almost all of their formal education; when most people meet their future spouses and the friends they will keep; when most people start on the careers that they will stay with for many years. This is when adventures, experiments, travels, relationships are embarked on with an abandon that probably will not happen again.

It's an interesting essay on 'the changing timetable for adulthood' affecting young people in most Western societies nowadays. I'm not sure I buy her entire argument in relation to the psychological origins of the changes (i.e.: the discovery of a new development phase called 'emerging adulthood'). Robin Hanson might have a better explanation with his hypothesis that we are seeing the consequences of an over-investment in status markers by young people - particularly by young women. But the changes are undoubtedly under way: young people are taking longer to 'grow up' with all the consequences that that entails (e.g.: falling birth rates, especially in Europe).

On the other hand, for those of us for whom our twenties are a distant (though fondly remembered) memory there's some good news in all this - less competition. It seems that the next big surge in innovation will come from the middle-aged and not from 'peach-fuzzed entrepreneurs' in their early twenties. Erik Erikson posited that the middle-aged often enter a lifestage of 'Generativity' that unleashes a spirit of creativity and compassion with real benefits for the wider society and economy. And with the young ones still 'finding themselves' it might well be up to us older ones to do our bit to get the economy back on a recovery path.

Okay it's a bit hypothetical, but at my age you've got to grasp all the straws that float by...
Posted by Gerard O'Neill at Sunday, August 22, 2010