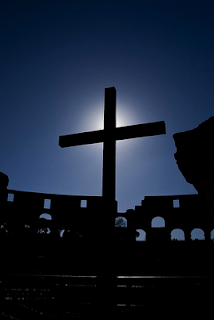 I spent the last day of my Italian holiday on the Palatine Hill in Rome, including a visit to the Colosseum. It was inspiring to walk among buildings - some over 2,000 years old - that were once the centre of one of the world's greatest civilisations. It was also a reminder of how no civilisation lasts forever - no matter how technically advanced and seemingly well resourced. I think that is part of what inspires the modern tourist: here was a society that surpassed all that had gone before it - inventing technologies it took over a thousand years to eventually replicate (e.g.: my favourite Roman building - The Pantheon). I guess it's the closest we get these days to an encounter with an 'alien' civilisation, one very similar and yet very different.

But being Rome, the other thing that strikes you is the pervasiveness of the Catholic Church - much more so than in any other Italian city I visited. For obvious reasons, of course. Also striking is the symbiotic development of Christianity and the late Roman Empire, as evident both in the historical records as well as in the buildings themselves. Intriguingly, quite a few of the surviving Roman buildings were 'preserved' by virtue of their becoming centres of Christian practice. Even the Colosseum - whence the photo - was saved from becoming a quarry (literally) by its declaration as a site of significant spiritual importance due to the number of Christians martyred there.

The co-evolution of religious, political and economic institutions continues in Europe. As The Economist points out in a fascinating piece on the fate of the Catholic Church (some of the comments are insightful too) Europe is once again at a turning point in terms of the social and political relationship between Church and State. In effect, the process that began in Rome nearly 2,000 years ago of Church/State integration is now reaching a point of complete de-integration (and not just in Italy).

Where will it end? Another Economist piece highlights the death of the European dream of progress towards an ideal civilisation. Much of what energised Europe historically (for good and for bad) came from the pervasive Christian culture that is now so apparently in demise. Though not completely: it seems, according to the Economist again, that the percentage of Italians who profess to be Catholics has risen in recent years, partly - it is suggested - in reaction to the increasing Muslim population in Italy.

It would be easy to extrapolate a continued decline in Catholic and other religious faiths and their involvement in activities such as education, health and social welfare on the basis of present trends. But here's the thing: the imminent collapse of State-funded ponzi-type schemes such as pension provisions across Europe (and further afield) in the wake of the unfolding financial and economic crisis will, if anything, stimulate greater demand for faith based services. Throw in an ageing population and I wouldn't be surprised if religion - including Catholicism - experiences a strong come back in the coming decades.

Come to think of it, it was the collapse of the Roman Empire that ultimately unleashed Christianity to become the global religious and socio-political force it eventually became. Not that it seemed like a great outcome if you were trying to earn a living on the Palatine Hill at the time. Life after civilisation is like that: better to make the most of the inevitable changes than to hark after the good old days. Especially if you are a Catholic.
Posted by Gerard O'Neill at Sunday, August 08, 2010