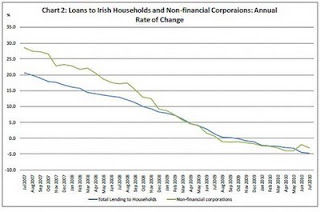 The latest numbers from the Central Bank show out that neither consumers nor businesses are borrowing at the moment. The rate of contraction/repayments even appears to be accelerating. It's not surprising - their findings coincide with Anglo Irish Bank's announcement (against a background of accelerating losses) that:

New lending remains low and continues to be governed by the conditions of the Subscription Agreement entered into with the Irish Government during 2009. Advances during the period have been restricted to funds that had been previously committed or approved to protect asset quality and aimed at reducing overall risk to the Bank. At 30 June 2010, committed lending work in progress (‘WIP’) totalled €1.1bn (31 December 2009: €1.9bn). The reduced level of WIP reflects the conditions of the Subscription Agreement, the reevaluation by both clients and the Bank of previously approved projects due to the changed economic environment and the expiry of previously approved facilities.

In other words the Government - which looks set to pour (not sure I've got the right 'p-word' there) as much as €40 billion into Anglo-Irish Bank - is insisting that they don't lend any money to new customers! Remind me, why are they're doing this...?

The stories of falling lending and the Anglo-Irish saga are directly linked of course. The Government's disturbingly stubborn approach to the Anglo and wider financial crisis in Ireland is making it more expensive for other Irish banks to source funds that they can actually lend to businesses and consumers. They are lending more by way of short term overdraft facilities (as Finfacts points out), but that of course this comes at a very high interest rate to borrowers (overdrafts are the equivalent of credit cards in that respect). Whereas longer term lending - the type synonymous with investment to secure long term growth - is shrinking.

Couple this with the Government's own borrowing problems and it's not too difficult to see a very nasty 'cash flow' crisis for the economy in the months ahead. Even Ireland's money supply figures point to a worsening situation - M2 and M3 are once again shrinking, whilst M1 is likely to shrink in the next few months if recent trends continue. I've heard from numerous businesses (and their accountants and even from several bank managers) that the Revenue Commissioners are giving less and less leeway to businesses struggling with VAT and PAYE/PRSI payments - even closing profitable but cash strapped businesses down for debts of less than €10,000. We're all increasingly caught in a squeeze of the Government's own making.

And still they keep pouring billions into Anglo.
Posted by Gerard O'Neill at Tuesday, August 31, 2010