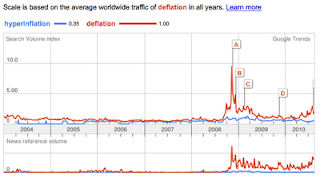 Even in the midst of Apocalypse, things will get better.
Gonzalo Lira

We're not there yet. At the point where Baron de Rothschild investment advice applies, namely: buy when there's blood on the street. That's some way off I think, for now anyway. But Gonzalo Lira reminds all recovering apocaholics that, even as things are getting worse, they will eventually get better. The quote is from a fascinating post on the Chilean experience of hyperinflation under Salvador Allende. I hadn't realised how bad it had got back then. Lira thinks Chile's experience is a precursor of what lies ahead for the United States. Minus the military coup, disappearances and death squads hopefully.

Here's one exert about someone who bought when there was blood on the streets:

In 1973, Don Alfredo was a youngish man, just starting out, with a degree in engineering but no money—until he inherited US$3,000 from a deceased aunt. Alfredo realized that the $3,000 were in a sense worthless: He couldn’t buy anything with them, and it wasn’t enough for him to leave the country and start over someplace else. After all, even then, $3,000 was not that much money.

So he took those $3,000, went down to the stock exchange, and spent all of it on Chilean blue-chip companies: Mining companies, chemical companies, paper companies, and so on. The stock were selling for nothing—less than penny stock—because of the disastrous policies of the Allende government. His stock broker at the time told him not to buy stocks, as Allende’s government, it was thought, would soon nationalize these companies as well.

Alfredo ignored his broker, and went ahead with the stock purchases: He spent all of his $3,000 on buckets of near-worthless equities.

On September 11, 1973, the commanders in chief of the four branches of the Chilean military staged a coup d’état. Within a year, Alfredo’s stock had rebounded about ten-fold. Since then, they’ve multiplied several thousand-fold—yes: Several thousand-fold. Don Alfredo has lived off of that $3,000 investment ever since—it’s what made him a multi-millionare today.

He realized, of course, that either those blue-chip companies would be nationalized by Allende—in which case he would lose all his $3,000 inheritance, which really wouldn’t change his fortunes very much—or somehow a new normal would arrive in Chile. Since the $3,000 couldn’t buy him anything, he took a gamble—and won.

What do these two true stories tell us? Simple: Buy when there’s blood on the streets.

Do read the whole thing. Of course, it would be wrong to assume that hyperinflation is inevitable - in the United States or in Europe - though demography may push us that way. Even Google Trends shows deflation to be the bigger news story right now (see image). But Lira reminds us that investment is about timing as well as risk. There will be fortunes to be made the years ahead, even by recovering apocaholics.