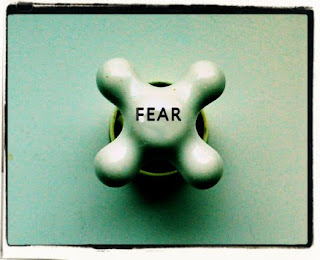 Ireland has become Depression Island. It has been noted by others, but when you've been away a while and come back to Ireland it truly is remarkable the degree of negativity in our media. Marc Coleman has a go today at the purveyors of bad news and the extent to which they are turning a bad but manageable situation into one that is worse and hopeless. Ironically he does so in the pages of the Sunday Independent...

He's right up to a point: though I have two caveats. The first is that he might just underestimate the resilience of the Irish people and their ability to discount (or turn off) the 'doom and gloom' mood music that dominate our airways and newspapers. The chart below is from the latest AIB-Amárach Recovery Indicator and it shows the dominant emotions in the daily lives of Irish people since April last year. Enjoyment and happiness remain the most prevalent emotions, stress and worry are secondary (as are anxiety, sadness and anger). It's a story of public anguish and private contentment for the majority of Irish people it seems. 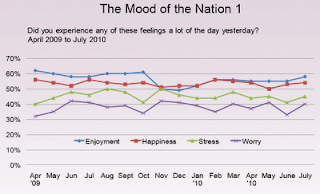 The second caveat to Coleman's critique of the bad news merchants is that there is, unfortunately, considerable potential for more bad news in the coming months. And I'm not talking double dips and falling stock markets (which we can manage), but rather the consequences of the self-inflicted wound on our economy that is Anglo-Arnotts Bank and NAMA. A wound that is turning gangrenous... Right now we are treating these home grown problems with the equivalent of medieval leeching. And the danger as I see it is that the damage now being done to the wider economy by these failing efforts will leave both the economy and the government weaker (in terms of borrowing capacity) than would otherwise be the case in the event of further, external shocks. The Anglo/NAMA mess should be abandoned: better now an orderly retreat than a catastrophic rout - as proposed recently by Peter Matthews.

Fear can induce either inaction ('frozen in the headlights') or over-reaction (e.g.: the bank guarantee). As highlighted in a fascinating paper on Fearsome Risks (ht Simoleon Sense):

When risks threaten, cognitive mechanisms bias people toward action or inaction. Fearsome risks are highly available. The availability bias tells us that this leads people to overestimate their frequency. Therefore, they also overreact to curtail the likelihood or consequences of such risks. More generally, fear can paralyze efforts to think clearly about risks.

Here in Ireland we appear to be suffering from an unholy combination of inaction and over-reaction - giving rise to the mood of negativity that Coleman and others have recognised. NAMA is the over-reaction: the inaction relates to the wider re-structuring of our economy to ensure we never again suffer the consequences of our self-inflicted crack-up credit boom. One advantage of de-commissioning NAMA would perhaps be to re-start a debate about the future structure of our financial institutions. I've been reading (and listening to) Laurence Kotlikoff lately and his proposals for Limited Purpose Banking (LPB). Check out his LSE talk here and his numerous papers and op-eds here. For a flavour, here he is on LPB in his essay Back to Basics:

There is a better way to restore trust in our financial system and get our economy rolling: Limited Purpose Banking. It's a simple and essentially costless change in our financial system that limits banks to their legitimate purpose: connecting, and intermediating between, borrowers and lenders and savers and investors. Under Limited Purpose Banking, all financial corporations engaged in financial intermediation, including all banks and insurance companies, would function exclusively as middlemen who sell safe as well as risky collections of securities (mutual funds) to the public. They would never, themselves, own financial assets. Thus, they would never be in a position to fail because of ill‐advised financial bets. No‐risk banking? Exactly. It means making banks‐‐meaning all financial corporations‐‐be the disinterested intermediaries they pretend to be.

It's radical - but a great deal more appealing than lumping our children and future generations in Ireland with the catastrophic consequences of Anglo and NAMA. A theme that is related, by the way, to Kotlikoff's work on Generational Accounting (which led him to forecast ten years ago the degeneration of the eurozone we are now experiencing). His is the kind of smart, long term thinking that we need right now.

By looking beyond the current mess, and deliberately side-stepping the Anglo/NAMA trap, we can better prepare ourselves for the future not just for the decade ahead but for generations to come. We have nothing to fear but our failure to act in the interests of future generations of fellow Irish men and women.
Posted by Gerard O'Neill at Sunday, August 15, 2010