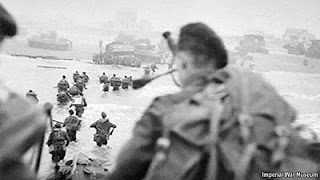 I mentioned the extraordinary story of Chuck Yeager in a previous post. There is something inspiring about wartime stories of heroism, especially in our safety-obsessed and risk averse age. Which is why I found the story of Bill Millin so fascinating. He was the only piper at the D-Day landing. The Economist has written a delightful story about him - do read it all. Here's an extract:

He was ordering now, as they waded up Sword Beach, in that drawly voice of his: “Give us a tune, piper.” Mr Millin thought him a mad bastard. The man beside him, on the point of jumping off, had taken a bullet in the face and gone under. But there was Lovat, strolling through fire quite calmly in his aristocratic way, allegedly wearing a monogrammed white pullover under his jacket and carrying an ancient Winchester rifle, so if he was mad Mr Millin thought he might as well be ridiculous too, and struck up “Hielan’ Laddie”. Lovat approved it with a thumbs-up, and asked for “The Road to the Isles”. Mr Millin inquired, half-joking, whether he should walk up and down in the traditional way of pipers. “Oh, yes. That would be lovely.”