A friend was telling me recently that his daughter (who is Irish) and her husband (who is Spanish) always holiday in Wexford with their children every August to get away from the heat in central Spain. At the same time as Dublin Airport is heaving with Irish people anxious to get to Spain for their week or fortnight of sunburn and air conditioning. Funny that.

Still, it reminds me that sometimes we don't know how lucky we are on our depressed little island. We have a tendency here in Ireland to flip from 'we are the greatest' to 'we are useless' in less time than it takes to say Anglo Irish Bank. So sometimes we need to see ourselves as others see us in order to get a more realistic sense of how well we are doing relative to others.

The latest global poll by Gallup is just such a refreshing - and positive - reality check for our benighted country. Gallup have simply asked people around the world where they would like to emigrate to if they had a choice. The answers are used as part of Gallup's Potential Net Migration Index (PNMI). Simply put, they work out what would happen to the adult population of each country if all the people elsewhere who wanted to move there did so. It's a fairly clear indication of a country's appeal when we see how many people would vote with their feet and move their if they had to.

And guess what - Ireland is in the top ten most popular destinations in the world for would-be emigrants, in terms of our PNMI score which indicates that our adult population would grow by 66% if everyone who wanted to move here did so: 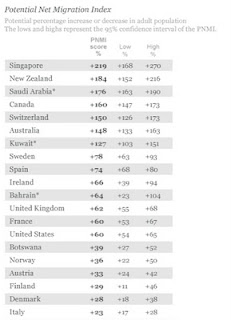 So despite our excesses of despair, from the outside we look like a very attractive place for many people to live. Our PNMI is down from 75% a few years ago during the boom, but we're ahead of the UK and USA and many other EU countries in terms of appeal.

Although Irish attitudes to immigrants have turned more negative during the recession, the fact is that would-be immigrants recognise that - despite the recession - we remain an attractive place to live and work. And you don't need air conditioning.
Posted by Gerard O'Neill at Friday, August 20, 2010