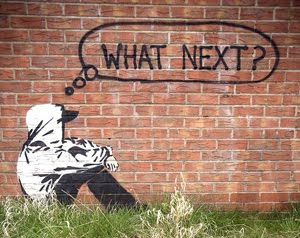 The International Labour Organisation has just brought out a detailed report on the global crisis of youth unemployment. The report suffers from the inevitable ideological biases of the ILO. For example, the (very real) unemployment problems of young women are referred to directly more than 30 times, whilst those of young men are singled out less than 20 times. Even though youth unemployment is overwhelmingly a problem affecting young men (48 million unemployed) rather than young women (33 million unemployed). This is especially true in developing countries, but also in countries like Ireland and Sweden.

Recent research by Giuliano and Spilimbergo builds on the premise that young adulthood is a particularly impressionable age for the formulation of beliefs about how society and the economy function. Their study concludes that a person exposed to a recession between the ages of 18-25 years is more likely to believe that life success is due more to chance than to hard work, to support measures of government redistribution but to have little confidence in public institutions at the same time... The unskilled youth are most at risk of detaching themselves from the labour force to remain dependent on the State for the remainder of their lifetime.

The ILO report does provide a thorough analysis of the cause of youth unemployment and policy prescriptions to mitigate the problem. They even have a handy diagram summarising all the barriers to youth employment: 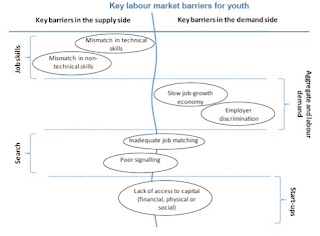 But here again ideological blinkers prevent the authors from addressing some fairly fundamental features of the real economic landscape: there is no mention of the 'cost of labour', i.e.: wage rates. The minimum wage, for example, gets mentioned just three times in the entire report (and then only in appendices), despite its crucial role in exacerbating unemployment among unskilled workers - especially youth - in those countries with minimum wages and rising unemployment. It's not the only cause or even the main cause of youth unemployment - but it is a factor. When capital is in short supply and labour is in abundant supply (as it is in Ireland right now) then the normal workings of the labour market should see the substitution of labour for capital. But the minimum wage artificially boosts the price of labour, thereby reducing demand. And to those who would argue that the minimum wage plays a key part in boosting aggregate demand, I have to ask: why not insist on a minimum wage of €100 an hour? Sure we'd have a consumer-spending-led economic boom in no time...

Nevertheless, the ILO is right to point out the seriousness of the global youth unemployment problem. In ten and even twenty years time, the scars left by the current economic crisis will not be seen in our GDP figures and balance sheets, rather they will be seen in our failing housing estates and prisons as a generation of young people are condemned by bad choices, bad luck and bad policies to a lifetime of failure. We can't do anything about the bad luck (graduating in the middle of a severe global downturn, for instance), but we can do something about facilitating better choices and changing - or getting rid of - bad policies.

The benefits of doing so to our society and to our country will be vastly greater than anything we will allegedly gain from the continuing bail out of Anglo Irish Bank etc.
Posted by Gerard O'Neill at Friday, August 13, 2010