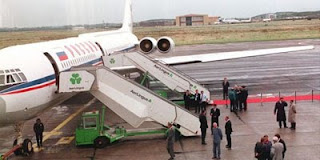 Was this morning Brian Cowen's Yeltsin Moment? For our younger readers, Boris Yeltsin was famous for a press conference he gave in Shannon airport in 1994 when he was the Russian President, or rather, that he didn't give.

Personally I don't have a problem with Brian Cowen letting his hair down and enjoying a few drinks with his friends. We all do it from time-to-time after a busy day. I just have a problem with him being Taoiseach. Boris wasn't too popular either at the end, come to think of it - his approval rate upon leaving office a few years after the Shannon incident was just 2%.

Though in fairness, the Taoiseach's approval rate stands at a far higher 5%. Maybe he better keep circling over Shannon.
Posted by Gerard O'Neill at Tuesday, September 14, 2010