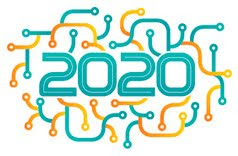 Maybe it's the tyranny of round numbers or something, but here's yet another look ahead to 2020, this time from Forbes. It's not bad actually - John Maeda's essay on Your Life in 2020 is close to my own heart with his emphasis on the explosive potential for a new renaissance of creativity and art in the years ahead:

We'll witness a return to the integrity of craft, the humanity of authorship, and the rebalancing of our virtual and physical spaces. We'll see a 21st-century renaissance in arts- and design-centered approaches to making things, where you--the individual--will take center stage in culture and commerce.

I see us free, therefore, to return to some of the most sure and certain principles of religion and traditional virtue‑that avarice is a vice, that the exaction of usury is a misdemeanour, and the love of money is detestable, that those walk most truly in the paths of virtue and sane wisdom who take least thought for the morrow. We shall once more value ends above means and prefer the good to the useful. We shall honour those who can teach us how to pluck the hour and the day virtuously and well, the delightful people who are capable of taking direct enjoyment in things, the lilies of the field who toil not, neither do they spin.

There are a couple of other interesting essays and views in the Forbes 2020 feature (including some interesting visual treatments of the topic, and a 'vote for the future' feature). Lisa Gansky things consumers will get used to sharing in the future rather than owning them thanks to the emergence of what she calls 'Mesh Businesses'. It has already started.

Apart from the tyranny of round numbers, I suspect part of the motivation for these type of prospective rather than retrospective pieces is to do with the seemingly insoluble nature of our present day problems. A feeling not just confined to Ireland obviously. Sure it's a form of escapism, but it serves a more noble purpose. It reminds us that we are not victims of circumstances beyond our control: we are masters of our own destiny to the extent that the future we get will be the one we 'deserve', either through what we do in the present, or what we fail to do.

Therefore thinking about the future we want and acting accordingly is the most responsible thing we can do right now. And also the most creative.
Posted by Gerard O'Neill at Sunday, September 12, 2010