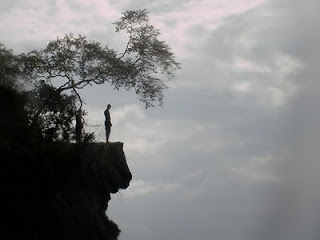 Jeff proposes a third class: those who thought they knew, but now know they didn't in light of continuing economic uncertainty. In a delightful essay - On Prediction - Robert Tietelman steps back from day-to-day economics and shares a more philosophical take on the forecasting challenges we face:

We live in a prediction society.

That's another way of saying we live for the future, our minds restlessly casting forward to some concatenation of forces, energies and tendencies that will produce a certain effect at a specific time: a sunny day, high of 87, meteor shower at midnight or, better yet, Dow 36,000. Homo sapiens has undoubtedly always needed to peer ahead through the banana leaves to an uncertain future, if only to get that next meal. But our fixation on the future, our deep, often subconscious belief in progress, is an aspect of modernity, fueled by the acceleration of technological change, and the rise of growth-oriented economies driven by free markets. In a performance culture, the future always beckons.

Our fixation drives us to frenetic efforts at forecasting:

We look back only to peer forward; the past has become a warehouse of shrouded furniture awaiting new digs. We drill into historical prices in hopes of establishing a discernible pattern into the future. We poll the masses, or accumulate Internet data, to extract some sense of how they'll react in the future. We ponder charts. We strain to master mechanisms -- economic, market, governance, sentiment -- in the belief that a known set of causes will create a known set of effects. We live for prediction because we need to believe in an orderly world where a known past shapes a predictable future. We're free agents dreaming of determinism.

I love that last line: we are free agents dreaming of determinism. I suspect a lot of commentators on Ireland's continuing economic misfortunes are such dreamers. They imagine that if only the 'right decisions' are taken on Anglo Irish Bank, on NAMA, on taxes, and on public spending then - and only then - will things start to get better and the true path to future recovery will beckon. But the world isn't determinist. To re-quote Paul Ormerod:

To repeat a key phrase which needs to be hard-wired into the brain of every decision-maker, whether in the public or private sector, intent is not the same as outcome. Humans, whether acting as individuals or in a collective fashion in a firm or government, face massive inherent uncertainty about the effect of their actions.

Which is why I find myself in Jeff Randall's third class: less certain in the face of growing uncertainty. Ireland today faces greater uncertainty about it's future than at any stage since the formation of the Irish Free State and Northern Ireland in 1922. Today's uncertainties are clearly different and less violent than those in 1922. Mainly because our economy is now more integrated into the global economy and therefore more exposed to developments elsewhere beyond our control.

However, uncertainty goes both ways: the future could be worse... or it could be better. The latter outcome - admittedly the less 'likely' one according to most prediction makers - could come about if....... Oops, I nearly fell into the determinist trap there. The thing is, I don't know what precise combination of decisions, measures and actions will 'solve' our problems. No one does. I do know there are things that should not be done, e.g.: making it more expensive to hire workers or less worthwhile to hold on to them. And I know that there are things that should be done, e.g.: stop propping up a bank that isn't lending to businesses so other banks can start to access the capital they need in order to lend to businesses.

I also know that it will the cumulative effects of the individual actions of employers, employees, savers, consumers, investors, fund managers, bank managers, civil servants, TDs, government ministers, newspaper editors and a host of others that will shape our nation's response to the uncertainties that we face. Nobody can forecast each of those individual actions, nor their cumulative effects. And I find that profoundly encouraging: our future is not completely in the hands of any one government or bond market or bank.

We should stop dreaming of determinism and determine to dream of a better future for our country, one shaped by the actions of every single one of us. With uncertainty comes probability and with probability comes chance. And chance - or fortune - favours the brave. Fear the forecasts and do it anyway.
Posted by Gerard O'Neill at Friday, September 10, 2010