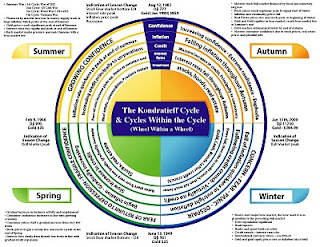 History is seasonal, but its outcomes are not foreordained. Much will depend on how tall we stand in the trials to come. But there is more to do than just wait for that time to come. The course of our national and personal destinies will depend in large measure on what we do now, as a society and as individuals, to prepare.
The Fourth Turning

There is something fascinating about cyclical theories of history. Apart from the obvious excitement of wondering 'where are we in the cycle now', they also help to make sense of the day-to-day confusion of news and events. Kondratieff was one of the great cyclical theorists of the twentieth century (see summary of his theory of cycles here), and then there is the Elliot Wave Principle - still used by some investors to plan their strategies.

But the other thing cyclical theories of history do is to remind you that there's nothing new under the sun - this time isn't different - and so we can learn from our predecessors and how they handled the same or even greater challenges successfully in the past. And one of the key learnings is about what we have to do as individuals - in our families, communities, workplaces and so on - to be prepared and to rise to the challenge.

I've been re-reading the work of William Strauss and Neil Howe in relation to The Fourth Turning. They posit a cyclical, generational model of change - mostly referring to the United States - which they describe as turnings:

A turning is an era with a characteristic social mood, a new twist on how people feel about themselves and their nation. It results from the aging of the generational constellation. A society enters a turning once every twenty years or so, when all living generations begin to enter their next phases of life. Like archetypes and constellations, turnings come four to a saeculum, and always in the same order:

Right now, they reckon the United States is well on the way to the Fourth Turning, which they describe thus:

A Crisis arises in response to sudden threats that previously would have been ignored or deferred, but which are now perceived as dire. Great worldly perils boil off the clutter and complexity of life, leaving behind one simple imperative: The society must prevail. This requires a solid public consensus, aggressive institutions, and personal sacrifice.

People support new efforts to wield public authority, whose perceived successes soon justify more of the same. Government governs, community obstacles are removed, and laws and customs that resisted change for decades are swiftly shunted aside. A grim preoccupation with civic peril causes spiritual curiosity to decline. A sense of public urgency contributes to a clampdown on “bad” conduct or “anti-social” lifestyles. People begin feeling shameful about what they earlier did to absolve guilt. Public order strengthens, private risk-taking abates, and crime and substance abuse decline. Families strengthen, gender distinctions widen, and child rearing reaches a smothering degree of protection and structure. The young focus their energy on worldly achievements, leaving values in the hands of the old. Wars are fought with fury and for maximum result.

Eventually, the mood transforms into one of exhaustion, relief, and optimism. Buoyed by a newborn faith in the group and in authority, leaders plan, people hope, and a society yearns for good and simple things.

Sure, their language is arcane (it reminds me of writings about the Enneagram), and maybe it's little more than a form of 'secular astrology' (I'm sure that's the professional historian's view of this sort of thing). And yet, and yet... It seems to me we are going through some kind of very real 'turning' here in Ireland, a real generational shift, and one that is following some of the patterns ascribed to the United States.

It certainly feels like a crisis - and not just a run-of-the-mill recession that we'll soon bounce back from. But as the authors of the Fourth Turning point out, such turnings also present rare opportunities to bring about radical changes that would otherwise be impossible in 'easier' times - and which will also equip us to get through the crisis to the better times ahead.

And don't forget it's cyclical. Spring always follows winter - as Kondratieff reminded us.
Posted by Gerard O'Neill at Monday, September 06, 2010